There were seven ranked fighters competing in their weight classes this week and a few big changes.

Danny Garcia, who was ranked fourth last week, moves all the way up to the #1 spot at junior welterweight after stopping Amir Khan on Saturday. Khan, who was #2, falls to #3. 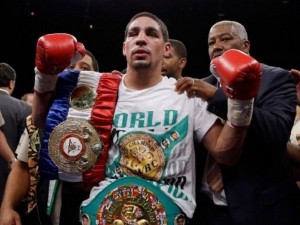 At heavyweight, David Haye’s TKO of Dereck Chisora pushed him two spots higher in the division, putting him in the #5 slot.

Yukinori Oguni debuts at #4 in the junior featherweight division with his upset win over fifth-ranked Masaaki Serie. Serie, with the loss, falls from the top ten.

Sonny Boy Jaro dropped his WBC title and falls from #3 to #6 with a loss to Toshiyuki Igarashi, who moves up to #3 from his previous #8 spot.

Takashi Uchiyama fought to a five-round technical draw in his WBA super featherweight defense against Michael Farenas and remains in his #2 spot at 130 lbs.

Ranked fighters, Hernan Marquez, Tomas Rojas, and Billy Dib were also victorious in non-qualifying bouts outside of their weight class.