How do you give awards to a year that was so completely disappointing from start to finish that award-winning performances were few and far between? Last year, ESPN2’s Friday Night Fights series was so consistently excellent that choosing the very best stuff felt like a real revisit of an embarrassment of riches. Last year’s FNF Fight of the Year (Wolak-Rodriguez I) turned out to be a genuine candidate for Fight of the Year when December rolled around and it came time for scribes for whom ESPN is not their natural home to recognize greatness. Your columnist is, of course, biased in favor of a fight series I cover, but this wasn’t me trying to convince people of the merits of a second-tier fight series in an effort to justify my work. Pawel Wolak and Delvin Rodriguez did that for me.

On top of that, the usual comedy goldmine that is Joe Tessitore and Teddy Atlas seemed a little flat this year. Last year, including a memorable quote award was as much an excuse to run one of Joe’s unintentional crowning moments of awesome (his comment about his dry cleaner thinking he’s a hit man in the Rob Frankel-John Molina fight) and one of Teddy’s “only you, Teddy” comments (a tortured metaphor even by Teddy’s standards about how throwing a jab is like drinking milk.)

This year? Well, at least my demo reel got a good 20 or 30 new installments for when, down the road, I’m gunning for Bernardo Osuna’s job. Speaking of whom: Bernardo Osuna, you are no Brian Kenny in there. Then again, Brian’s in a league of his own in terms of on-air presence, so that’s hardly a grave insult. Bernardo did seem a lot less willing to mix it up with Teddy the way BK did, though. The studio show definitely lost something without its longtime voice.

As if the fights weren’t bad enough, 2012 might go down as the year ESPN finally showed its true colors about how little it gives a damn about boxing fans. FNF got into a habit of late starts that consistently agitated fans on social media platforms and may have had a negative effect on ratings throughout the TV season. ESPN even had the complete gall to delay the opening of FNF so they could show a women’s college softball game in its entirety. NASCAR I can understand. Even tennis has three times the average audience that boxing does. But women’s college softball? The only people who would have complained about a Heidi Bowl situation there would have been the parents and significant others of the players. You can’t tell me that pissing off a million plus boxing fans who tune in every Friday night was worth that. Bad form, ESPN. Bad form indeed.

In a year with a severe lack of Ward-Augustus or Wolak-Rodriguez level scraps, the kinds of fights where both guys just go bombs away on each other and somehow, through divine intervention, manage to go the distance, the FNF Fight of the Year has to go to the closest, most competitive, most flat-out riveting fight that occurred during the calendar year. Hammerin’ Hank was supposed to win this one; your columnist even went so far as to call Ray Beltran a journeyman in the preview, treating him like nothing more than just another tomato can, a speed bump on Lundy’s road to a title.

The problem came when nobody told Beltran he was supposed to lose. Beltran nearly knocked Hank Lundy out in the third round, only to find that Lundy’s reserves of heart and skill are almost limitless. Lundy staggered Beltran with a shot of his own toward the end of that third round, which was by far the Round of the Year on FNF. It wasn’t exactly Ward-Gatti I round nine, nor did it even rise to the level of round four of the Lundy-David Diaz fight on last season’s FNF finale, but in a year where fans have been absolutely starved for great back-and-forth action, a fight that finally ended 96-94 (twice), 95-95 for Beltran and gave fans three minutes that reminded us why we all love boxing? It was a privilege to see it. Hank Lundy has, for a couple of years now, been one of the best attractions ESPN has to offer; every time he is on TV, call your friends because it’s going to be a great fight night. 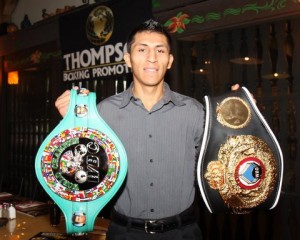 “Mini” Burgos used his exposure in boxing’s answer to the NBA D-League to make a case for why it’s silly to consider him part of the D-League. This was like watching Dwight Howard play against the Maine Red Claws when he should be trading elbows in the low post with the Boston Celtics. Burgos first beat a fading Cristobal Cruz in February in a fight where the veteran former world champion Cruz exposed some flaws in Burgos’ game that led many to wonder about his ceiling. If that were all he had to show for himself, he would not be singled out for praise in August.

However, when it is painfully obvious—and by “painfully” I mean painfully to Cesar Vazquez’s chin—that a fighter has worked hard in the gym and improved over the course of a season, that is more than enough to suggest that Juan Carlos Burgos has made the leap in ability as a fighter, justifying his place as the fifth-ranked guy at junior lightweight according to the Boxing Tribune’s unbiased world rankings. Only the four beltholders (Groucho, Harpo, Chico, and Zeppo for all the good sanctioning bodies do us) outrank him, and one of those guys, Adrien Broner, is moving up to lightweight. If 2013 is the year that Burgos becomes a world champion, he will look fondly back on his Friday Night Fights launchpad as the national television exposure that made it possible.

Three words best sum up your columnist’s reaction to this fight: “Holy shit, wow.” With 51 seconds left in the second round, Cristobal Cruz got caught right on the nose by a short left hand and landed like a sack of wet sand. Instinct alone allowed him to beat the count, but referee Robert Byrd knew a beaten fighter when he saw one and waved the contest off.

Boxing is a sweet science and a brutal art, and they don’t come much more brutal than a punch that rang through the arena like a gunshot. Cruz bled from the nose in a way that only someone who has broken that appendage can; this was a vicious, decisive victory—indeed, it was Fortuna’s second such win this year, after he smacked around Yuandale Evans earlier in the season in the other big argument for KO of the Year.

Had Juan Carlos Burgos not been the guy fighting with more at stake at a more title-contention-worthy level of opposition, Javier Fortuna would have to be considered for the Fighter of the Year honors as well; as it stands he will have to settle for recognition on his best punch, biding his time for a breakout performance next season.

WHAT THE CRAP WAS THAT?! AWARD: Donte Stowers

Here at the Boxing Tribune, we try to give recognition to the lunchpail guys who have moments to get ready before they’re thrust into the national television spotlight for a time-filling four-rounder when a scheduled TV fight ends early. Swing fighters have launched their careers to greater things (Hank Lundy, for example, mentioned earlier as a guy who brings the goods, made his TV debut in a swing fight). There are times, however, when a swing fighter takes the word “professional” and stretches it beyond credibility in a pro fight.

Donte Stowers disgraced himself in a fight against Joshua Conley in San Jacinto, California on the undercard of Mike Dallas Jr.’s win over Javier Castro. Stowers incited the wrath of referee Lou Moret, who was so disgusted by the alleged “boxing” that Stowers was doing that not only did he wave off the contest in the second round, he outright told Stowers that he did not belong in a professional boxing ring. We salute guys with toughness and courage, but Donte Stowers made an absolute mockery of the sport of boxing on national television. That was a disgrace.

Friday Night Fights’ fifteenth season on the air ends tomorrow night; we will have a full recap of the night’s action. Stay tuned.

Fox Doucette covers Friday Night Fights for The Boxing Tribune. His weekly column, The Southpaw, appears on Thursdays. Fan mail, hate mail, and memories of 2011 can be sent to beatcap@gmail.com. Email sent to staff members may be published or otherwise publicly disseminated.