First of all I would like to extend kudos to one Orlando Cruz who recently came out of the (no doubt fabulously color coordinated) closet. You should always be yourself and be proud of who you really are…Anyway, everyone was talking about Cruz for at least a few days and you can’t buy that kind of exposure (the media coverage, not the In & Out/Brokeback Mountain kind of exposure you silly goose). Well, OK. You can, but Orlando did it in a respectable manor (albeit a very sassy, well manicured and smartly dressed manor). Smart P.R. move, too. Many more casual fans will know who he is when he next fights due to the publicity he has received.

With all due respect to the medical problems that he and his lovely wife went through, can someone get Robert “The Ghost” Gurrerro a fucking fight already? I’m so tired of hearing him Youtube ‘call-out’ everyone and their dead grandmother. And Robert, please stop mentioning Floyd Mayweather when you pander to the media for coverage about who you think you deserve to trow fists wit…I’d bet dollars to pesos that that one will never happen.

Now, someone like Timmy Bradley could feasibly land a fight with the sport’s biggest star. I can easily envision a scenario where Mayweather pops Bradley’s ‘0’, takes his belt and looks better than ever in doing so. And against a man who ‘beat’ the second biggest attraction in the game (someone who Mayweather himself should have faced and defeated long ago),  there would be several different angles from which they could sell this fight.

While we’re still on the subject of boxers who have been overly selective in their career paths, Bradley should go back to fighting as often as he did when he was a Jr. welterweight. Back in 2008-09, Timothy Bradley was a mini-force to be reckoned with. I remember when he went to Nottingham and wrested the title from the incumbent WBC belt holder, Junior Witter. Great stuff, loads of courage and a spirited performance. Actually, ‘spirited’ is a good adjective for the manor in which Timmy fights; he generally defeates his opponents through sheer work rate and tenacity (sometimes even via ridiculous score cards) if nothing else.

Ridiculous decisions aren’t limited to judging in the world of boxing, either. Occasionally fighters will be incestuously aligned with major sanctioning organizations,  will blatantly violate (accidentally ingest prescribed marijuana oil? What the hell is that, anyway?) rules and regulations, expect (and receive) a slap on the wrist, will have said sanctioning bodies feign outrage to the media and will offer up half-assed, fat-faced apologies to the public.

Julio Cesar Chavez Jr.,  you should put down your diamond encrusted Mexican flag bong and move up in weight where 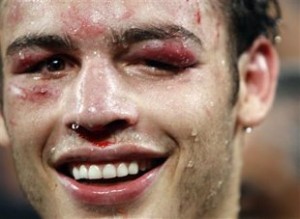 your advanced enchilada annihilation techniques can be better utilized. That way you won’t have to cry to Nacion ESPN about how bad you feel draining your body 33 lbs to make weight so you can have a ridiculous size advantage over your opponents come fight night…How about a clash with former middleweight world champion Kelly Pavlik? You guys totally have that whole struggling with addiction thing in common. Plus it would make a helluva scrap…Ask Tio Sulaiman if it’d be OK to have a fight that the fans would actually give you credit for if you did pull off a win. Kelly is not a spent clip. I mean there’s at least a few bullets left in there I’m sure. I don’t know what caliber…Let’s just say for arguments sake they’re .25s. Anyway, the point is, are you going to go back to fighting the Raul Munozs’ of the world or are you going to take this opportunity to come back better than before? Basically what I’m asking is: Are you a Mexican or a Mexican’t?