Buenos Aires, Argentina played host to the lone female title bout this past weekend, where two undefeated fighters met for the WBC female lightweight championship. The champion, Erica Anabella Farias (15-0, 8 KO’s) put her title on the line against (then) undefeated challenger Victoria Noeli Bustos (6-1, 0 KO’s). It was Farias’ fourth defense of the title she won 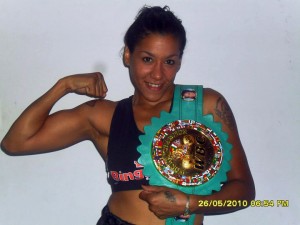 in August of last year with an eight round technical decision over Ann Saccurato. To that point, Farias had held the interim version of the same title going back to May of 2010. For Bustos, this was her first time fighting outside her hometown of Santa Fe, Argentina and her first scheduled 10 rounder.

Farias used her long jab and wide looping shots from the outside to control the bout and keep Bustos at a safe distance. In the eighth round, Bustos turned up the pressure on the defending champ, which made for a more exciting final three rounds in what was otherwise a routine boxing match up to that point. Going into the 10th round, we saw the two go punch for punch at ring center, making it easily the best and closest round of the bout. Bustos late push on the gas wasn’t enough to close the gap however, and all three judges awarded the bout to the defending champion. Scores of 99-91, 97-93, and 98-94 gave the win to Farias, retaining both her WBC title and undefeated record.

In Mexico, undefeated Jasseth Noriega (15-0, 1 KO) won an eight round decision over Maria del Refugio Jiminez, who was making her professional debut. Two winless fighters stayed that way in the Dominican Republic: Wanda Ozuna (8-4, 2 KO’s) stopped Zuleidiy Diaz (0-11) in the first round, and Marisol Reyes (8-6-1, 3 KO’s) stopped Rossy Gonzalez (0-2), also in the first round. Germany’s Sarah Peters (2-0, 1 KO) won a four round decision over the more experienced but less talented Borislava Goranova (4-35, 0 KO’s).