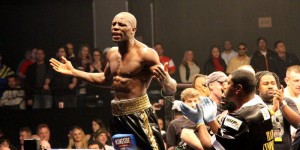 Photos and Reports by Gary Purfield

It was supposed to be an early Christmas present for boxing fans.  It was an afternoon when their sport returned to the top of the sporting world with a date on network television.  A chance to break back into the mainstream.  Instead it turned into another lump of coal the boxing world offers up far too often and explains why it has become an afterthought to most sports fans.  After a brilliant boxing performance the smaller but more athletic Cunningham (25-5, 12 KO) had a win snatched away to be handed to Adamek (48-2, 29 KO) via some incredibly questionable judging.

Main Events promotions through the success of their Fight Night series on NBC sports procured this date to televise an old fashioned yule tide event, so to speak, with a heavyweight bout on the main NBC station.  Looking to make the most of the opportunity they staged a rematch between Tomasz Adamek and Steve Cunningham.  The two battled four years ago in a thrilling cruiserweight title showdown that Adamek took by split decision.  Now with both fighters at heavyweight trying to make the most of this last chapter in their careers they would battle again at the Sands Casino in Bethlehem with a national TV audience. 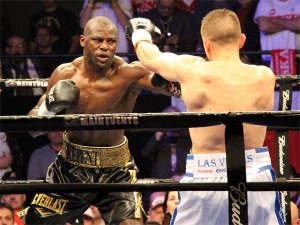 or Cunningham.  Adamek had matured into the division weighing 225lbs for the bout to Cunningham’s 203.  The Philly fighter embraced the underdog role and came prepared to neutralize his bigger foe Adamek, who hails from Poland now making his home in Jersey City, NJ. Cunningham used his jab to control the distance and boxed a masterful performance.

The crowd came prepared as well with both fighters being local to the area, bringing large cheering sections packing the Sands Event Center to a sellout raucous crowd.  Adamek’s Polish faithful sporting their red scarves started the chant of Adamek-Adamek early and often.  However, they were met by the droves of Philly fans sporting USS Cunningham scarves that matched every Adamek chant with USS-USS.  It made for an exciting environment that unfortunately was overshadowed by the result.

In the first bout, Cunningham was the better boxer but lost on the scorecards due to several points in the fight where he broke concentration and paid by being planted on the canvas.  This time he made no such mistake.  Using his jab to set up hard straight right hands and right uppercuts, Cunningham seemed to be winning at every turn.  He wasn’t just landing more often.  He was landing the harder more eye catching shots as well.  The iron-chinned Adamek took them well but several times Cunningham landed bombs that had an impact.

Adamek, to his credit, showed the grit that made him a fan favorite.  He pressed the action against his more athletic opponent.  He seemed to be employing a steal the rounds strategy by exploding with flurries every round at the ten seconds left mark, but that seemed to everyone in attendance to be too little too late as Cunningham was winning the rounds. 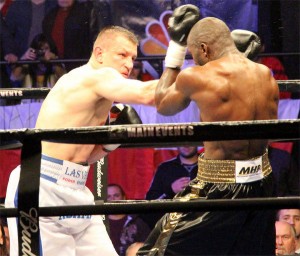 Adamek made a late push, coming on strong in rounds eleven and twelve to win the final stanzas.  Despite the late push most thought this was a clear cut fight where the reading of the scorecards would be nothing more than stating the obvious.  Steve Cunningham had avenged his loss from four years ago and announced himself as a real contender at heavyweight.

But this is boxing and nothing is guaranteed.  The first score was read as an odd and virtually impossible 115-115.  With the next two cards being split at 116-112 for Adamek and 115-113 for Cunningham, Michael Buffer announced a draw.  This seemed absurd but it was about to get worse.

Seconds later, Buffer announced that an error was made on the card he was given and the 115-115 was actually a 116-112 for Adamek giving him the split decision win.  The Boxing Tribune scored the fight 116-112 for Cunningham.  The majority of press row had it at least eight rounds to four with many giving nine or ten rounds to Cunningham.  It would figure that this backwards sport would manage to have a controversy on the day they get to return to national TV.  Is it any wonder why this sport has become an afterthought that can be found in the “other” section of most major sports websites?

Afterwards, the hard luck Cunningham was clearly dejected from what had happened.  The long-time talented cruiserweight, who is a two-time title holder that never could get much fanfare in the forgotten division showed up for the press conference looking like Santa forgot to stop in his chimney.  Cunningham spoke his thoughts about 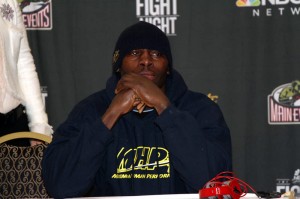 today and his career.

“What can I say man.  What else I gotta do?  Everybody can’t knock everybody out you know.  Go knock em out champ, next time leave it out of the judge’s hands.  Who can do that?  If it was that simple it’d be done.  I’d be 28-0 with 28 knockouts.  I boxed my brains out today.  I boxed his brains out today.

“It’s sad and it’s disappointing.  I go to Europe and this happens in Europe.  Come back to America and this happens in America.  What else do I gotta do other than knock dudes out, you know?  Real men cry, real men shed tears.  I’m a let you all know that right now.  Real men shed tears.  I got a family to take care of.  I got a team I got to perform great in front of because they perform great for me in training.  Concrete jungle stand up.  You guys did a great job for me in camp with me and for me and I love you.”

Nazim Richardson chimed in: “you took the ring and you did your job.”

Cunningham continued: “we did our thing in the ring.  It saddens me.  It saddens me because like I said before I’m not a superstar.  I’m a two-time world champ.  Unlike other former champs like say a Bernard Hopkins, he can lose to a Jermain Taylor, fight for a million some odd dollars, and then go back and fight Tarver for a million after a loss.  I can’t do that.  I haven’t fought for that much money accumulated in my career.  So my next pay is going to be low of course.  I need these wins, you know what I mean.  I need these wins.  I can’t be getting cheated like this.  You know this is ridiculous.  It’s sad.  We go through a lot.  You know do I want to fight this dude again and have the same thing happen.  I did it.  It’s nonsense.  What needs to happen in boxing for this not to happen again?  Like really, did I win the fight or not.  So what needs to be done to get these judges on the right path?”

Cunningham explained the key to his success in the fight and the changes he made since the first fight with Adamek.

“Box smart and fought on my terms.  I engaged the fight.  He started coming on and you know he had his spurts but I felt I controlled the fight with my jab and movement.  I mean that’s what boxing is.  This isn’t slugging.  Change the name then.”

Trainer Nazim Richardson added; “Adamek was waiting for the fight he got the first time.  When he didn’t get it dude tried to force it.  But Adamek wasn’t allowed to do what he wanted to do.  That’s why it’s called boxing like he said.  You want to see fighting they got roosters that they can put spurs on, stick them out there and there’s no strategy, they go right at each other.  You have another sport that only has like three, four rounds and guys punch each other’s brains out.  But this sport and all these people in this room that been around this sport know we beat our kids in the end everything off the jab, everything around the jab, the jab the most important thing in the fight.  But then all of sudden we get a kid that want to use the jab we don’t want to treat him fair.”

Adamek discussed that he believed he landed the harder punches and described that Cunningham in his opinion is not a puncher.

“It was many punches, I am very happy.  I want make more war but his tactic was more run.  I hit him stronger and I am very happy I win second fight.”

To which Cunningham had a sharp response to Adamek’s classification of running.

“He keeps saying running, running, running.  You saw the fight with him and Chris Arreola.  Was that running?  You know was that running.  Cause I was doing the same thing he was doing to Chris Arreola.  Boxing, you know, boxing.  Smart fighting, you know that’s what is, not running.  You know if any judges say that’s running they need to be fired.  They don’t need to judge another fight in their life.  They don’t need to judge roaches crawling up the wall.”

The shame of the whole thing is the afternoon had some great points.  It was an action packed fight.  It had a great crowd and a national TV audience.  It should have been a big moment for the sport.  Instead it will be remembered mostly as another moment where boxing shot itself in the foot.

In the opening TV bout Vyacheslav Glazkov ((14-0, 10 KO) scored a TKO over Tor Hamer (19-2, 12 KO) with the end coming at the end of round four.  The bout was scheduled for eight in the heavyweight division.  Glazkov was controlling the action and landing hard shots that were having an effect on Hamer.  Then to everyone’s surprise the fight was waived off in the corner after the fourth round when Hamer chose not to continue.  If he had a legitimate reason to quit it was never stated and it certainly came off that Hamer just had no desire to keep going.

The local product Jerome Rodriguez (2-0-1, 1 KO) looked impressive getting a second round TKO at 2:56 of round two over Edwardo Stith (0-1) who was making his pro debut.  Rodriguez was landing hard shots from the opening bell and the fight was stopped with Stith taking a pounding the corner at the end of round two.  The bout was scheduled for four rounds at junior welterweight.