I know, I know. You are still hungry due to the absence of last week’s Sunday Brunch. It was an unavoidable non-appearance and I do apologize for leaving without providing something for you to nibble on.

Today, we have a special treat.

By now everyone has had their fill of the obligatory year-end awards. However, there are a few awards that were brushed over in lieu of more meaningful, more insightful categories… Presented here in stunning high-definition, 7.2 Dolby Digital DTS 3D surround sound are: The Top Ten Rest of the year-end awards.

Everyone swears this one is for real. Everyone except me. How many times have you gone on multiple radio/XM/Podcast shows to tell the world that you and your former bff are ‘beefin’? What makes it even less believable is the fact that 50 likes to have drama surrounding his album releases … and what do you know? – He has one upcoming.

9. Most Overrated Fighter Based On Recent Performances/Accomplishments Award:
Nonito “The Filipino Flash” Donaire –

I understand that the hate mail will be vicious for this one, but let me explain. Nonito has fought four times this year – which is commendable, however, the men he was paired with had no chance for victory. And that’s not to say that he’s so fantastic that he is able to out-class anyone he’s matched with. He is quite talented, but this year he was put in with less than stellar opposition. Toshiaki Nishioka was indeed ranked number one in the division at the time of their fight, but he was also out for an entire year and was 36 years old. Jeffery Mathebula did present some logistical challenges for the Flash, but ultimately Nonito beat up on the tallest South African that no one has ever heard of. And let’s not bring up Arce’s name. It has to say something when more than one person you fight in a given year retires happily after they lose.

The former Lineal WBC, IBO and IBF heavyweight world champion somehow thought it would be a good idea to take more than a year off at 40 years of age before facing the “Saul Alvarez” of the 200 pound plus division. Unfortunately, Rahman was almost bested by the ring walk ahead of the contest as his woefully inadequate musculature was barely enough to keep him upright as four stairs nearly beat Alexander Povetkin to the knockout before the match had even started.

A few years ago, Floyd was singing the praises of Andre Ward as his heir apparent, however, since then a new kid has emerged and he has all of the flash, arrogance and even the uncanny ability to ‘see’ everything happening in the ring much like Mayweather does. Broner is Floyd’s new favorite future star and (according to the pound for pound great himself) he will be fighting on Money’s next undercard.

After missing more than a year of action from a professional boxing ring, Mexican tough guy Alfredo Angulo looked to bounce back from his I.C.E. induced exile, and in 2012 he registered one impressive knockout and one uneven (but winning) performance. Being likened to a red-handed cheater isn’t the best nomination to be had by any means, but talk to any Mexican about Antonio Margarito and you’ll see a tiny glint in their eye as they recount all the badassery the man used to encompass. If nothing else, El Perro has a very similar style and for whatever that is worth, he will continue to remind me of the disgraced former champion.

5. Most Annoying Wife/Girlfriend of a Professional Boxer Award:
Will “Power” Rosinsky’s cheerleader – (Pavlik vs. Rosinsky)

“Hands up, Will!” … “Let’s go, Will!” Multiply those two choice phrases by seventy five million billion and you not only have the amount of times those lines were shouted live on HBO by the most annoying woman on the planet, but you also have the number of times I considered blowing my brains out during the telecast.

I think a lifetime achievement award should be handed to Carl “The Cobra” Froch for somehow netting the most beautiful woman on the planet. Rachael Cordingley, I love you. This category will always be yours.

This one belongs to a man who, at his height was able to bring literally throngs of fans with him overseas (across the pond as it were). Not a single entertainer has (had) that kind of pull, not even Oprah. Can you imagine 30,000 fat couch potato house wives flocking to Manchester, England to listen to Oprah speak for 36 minutes? Even though his come back was highly unsuccessful from a boxing standpoint, the loss to the Ukrainian, Senchenko was an extremely lucrative disaster.

2. Most Unassuming Apparel Worn By The Most Brutal And Vicious, The Most Ruthless Champion There Has Ever Been Award:

Mr. “Iron” Mike Tyson was seen ringside for the public execution of Erik Morales at the hands of one Danny Garcia sporting an excellently en vogue ivory cardigan turtle-neck. As Bill Cosby as the former baddest-man-on-the-planet looked in the getup, I’d still hand him my wallet, pin code and password information at a moments notice if he even looked in my general direction. 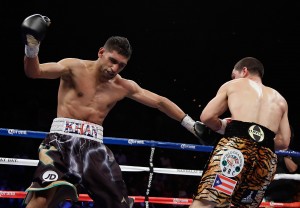 Amir “King” Khan, the king of the Samba dance (seriously, click on that Youtube video, it’s the remix, baby), nets the number one spot this year. Not exactly because he did a lot of dancing in the ring (he definitely did some dancing) but because his world-class speed will never make up for his world-class deficiencies.  Anytime Amir is in deep with someone who has even a modicum of timing he will wind up doing the samba dance before the night is over – no matter how many times he switches trainers.

Stay tuned to The Boxing Tribune and we will see you next year with a brand new edition of The Sunday Brunch!