Fantasy Springs Casino, Indio, California– Uninspired could be one word used to describe the Ronny Rios-Rico Ramos bout Friday night on Showtime’s ShoBox series; “Shitty” could be another word to describe it.

Theoretically, a battle of 20-something prospects with just one loss between them sounds swell. In practice, though, a counter-punching Ramos(21-2, 11 KOs) who can’t counter-punch that well, and a offense-minded Rios (20-0, 9 KOs), 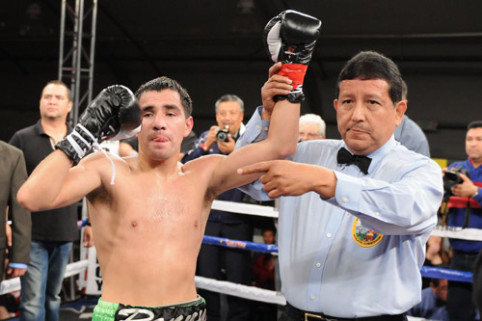 who wasn’t interested in pressing the action, mixed together about as well as a handful of Ambien and a fifth of Jack Daniels. Zzzzzzzzzzzzzzzzz.

To be fair to both fighters, neither is really a finished product at this stage of their careers. So, when Ramos moved just for movement’s sake and went long stretches without throwing a single meaningful punch, it was only because he’s a mere babe in the woods, a former paper titlist with nothing worldly about him. And when Rios followed up a solid body shot with a lethal combination of nothing-nothing-nothing, it was to be expected of a 22-year-old prospect just graduating from the phase of his career where he beats up Footlocker assistant managers and professional CTE sufferers.

Of course, though, this lack of main stage refinement shouldn’t have stopped Rios and Ramos from actually putting forth an effort on Showtime’s secondary boxing show.

As for the fight itself, there’s really not much to recap. Rios’ brand of nothingness, highlighted by an occasional body attack, allowed him to control the first half of the ten-rounder. Ramos’ uninformed movement and his every-so-often pitter-patter of gloves to Rios’ face had him taking a slight edge in the second half of the bout.

The Boxing Tribune scored the fight, 96-94 in favor of Rios. Official judges, Pat Russell and Fernando Villareal, scored the bout 96-94 and 97-93, respectively, for Rios. Fritz Werner, perhaps having fallen asleep by the third round, issued a blurry-eyed 100-90 card, also for Rios.

With the win, Rios takes the vacant NABF featherweight title and will labor under the eternal hope that nobody remembers this performance when it’s time to promote his next fight.