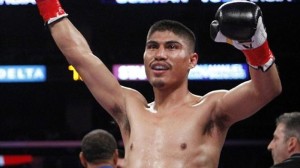 The 25-year-old Garcia was in command throughout the contest, dropping Salido four times (twice in the first and once in both the third and fourth rounds) before an accidental clash of heads broke Garcia’s nose in the eighth round and sent the fight to the scorecards.

It was a frustrating evening for both fighters as Salido, who was doing some of his best work at the time of the stoppage, couldn’t work to rally a come-from-behind victory and Garcia, who was putting on a masterful performance, didn’t get a chance to close the title-winning effort in a world champion kind of way.

A rematch was discussed in the ring after the fight, but it was abundantly clear that Garcia is just too quick, too strong, and too good for the well-traveled now-former champ.

It’s not that Rosado is a bad fighter, it’s just that he wasn’t booked to win. The Philadelphia native lived up to his role by putting in enough of an effort to give Golovkin rounds, but not enough to actually upset the GGG bandwagon.

This was every bit the mismatch as anything Julio Cesar Chavez Jr. or Saul Alvarez have been granted as fellow-paper champs, but Golovkin will get a pass based on his farcical status as “Most Feared Fighter,” 2013.

Kazakhstan’s WBA middleweight titlist is good and very worthy of “must see” status, but the double standard is cringe-worthy. Until further notice, as a “legitimate” world champ, he’s more “Canelo” than Hagler.

In the televised opener, fans were treated to a solid scrap and an obvious world title win for Juan Carlos Burgos (30-1-1, 20 KOs) over defending WBO super featherweight champ, Roman “Rocky” Martinez (26-1-2, 16 KOs), only to discover that the bout was actually scored a draw.

Mexico’s Burgos put in a solid performance, banging away at Martinez’s body throughout the contest and controlling most of the action in what should’ve been a solid decision win over his Puerto Rican rival.

The Boxing Tribune scored the bout 117-111 for Burgos, identical to the score issued by judge, Waleska Roldan. However, Roldan was canceled out by John Signorile’s odd 114-114 score and the downright obscene 116-112 score, in favor of Martinez, handed in by Tony Paolillo.

Forget Usmanee-Barthelemy, this was, by far, the biggest, most frustrating bad decision of the year thus far. Burgos should be champ. He’s not. Paolillo and Signorile blew it.

Hopefully, Burgos gets the return bout he deserves and at least two decent judges the next time.