Never let it be said that Top Rank’s Bob Arum is not a survivor. In an era where Americans are becoming less and less of a factor in boxing, Arum has all but abandoned U.S. fighters in favor of ethnic niche marketing.

Arum was always a genius at matchmaking, at putting his guys against the “right” fighters at the right time. But, with Manny Pacquiao, he backed into a goldmine and an entirely new way of doing his boxing business. 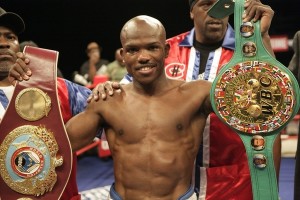 For the last several years, Arum has been bankrolled by the awesome force of Pacquiao-mania and the less jaded and less discerning fans brought into the sport by the Filipino pop culture icon.

And there’s no doubt that Arum is trying to duplicate this business model with Nonito Donaire, already turning the talented “Filipino Flash” into Top Rank’s personal hothouse flower. Whether Donaire can be plugged into the Pacquiao spot remains to be seen, but it’s not likely that Arum will be dipping back into the American talent pool for his “next big thing” anytime soon.

So, that brings us to Timothy Bradley– an impulse buy on Arum’s part, a purchase to show that Pacquiao would actually be willing to fight a prime African American fighter and a name to add to Manny’s shrinking pool of potential resume-padders.

Apparently, the only plan for Bradley was for him to lose to Manny and then be cast aside, like most impulse buys. His controversial split decision win over Pacquiao really didn’t change all that much. Arum had nothing for Bradley and seemed totally disinterested in actually promoting him.

Of course, Bradley’s public attacks on Arum’s integrity following the Pacquiao bout haven’t helped him any, but it’s not like Arum to turn his back on a buck.

The conspiracy theorists may say that the fix was in from the beginning and that Bradley was given the win over Pacquiao in order to generate a fake rivalry which could occupy Manny for the next year or so. But when Pacquiao became embarrassed by the post-fight circus and, most importantly, showed complete disinterest in another Bradley bout, all plans were scrapped. But all of this is just a conspiracy theory for only the most jaded of fans.

Whatever happened, Bradley signed his career over to Top Rank in order to get a shot at tipping the cash cow. He did. And now he sits on the sidelines, waiting for a go-nowhere, dead end of a bout with ESPN-level pug, Ruslan Provodnikov on March 16. At the moment, Pacquiao doesn’t care to fight Bradley, Juan Manuel Marquez isn’t interested in him, and Arum isn’t exactly working overtime to promote him.

Late last year, Bradley passed on a rematch with Lamont Peterson, working under the assumption that he had now become a bigger star after the Pacquiao fiasco. Having to settle for a  junior welterweight fringe contender like Provodnikov should be a real eye-opener for Bradley and his team. The Russian is solid enough and he always puts forth an honest, entertaining effort, but Bradley won’t be building his star or his brand– or whatever the hell publicists call it– by fighting a guy with more letters in his last name than members in his fan club.

Unless desperation forces Arum to take Bradley from the shelf and dust him off for another run as “opponent,” the former junior welterweight alpha dog and current WBO welterweight champ will be going nowhere for the remainder of his Top Rank contract.

Hopefully, for Bradley, the one big Pacquiao payday makes up for the frustration of wasting some of the prime years of his career.

You can email Paul at paulmagno@theboxingtribune.com or watch for his upcoming line of boxing media action figures, complete with laminated press passes and kung fu ass grip. Paul is a full member of the Burger King Kids’ Club, a born iconoclast, and an ordained minister in the Universal Life Church.