On Thursday, the Nevada State Athletic Commission (NSAC) voted 3-2 to suspend Julio Cesar Chavez for nine months and fine the former WBC middleweight titlist $900,000 as a result of testing positive for marijuana following his September 15 bout with Sergio Martinez. 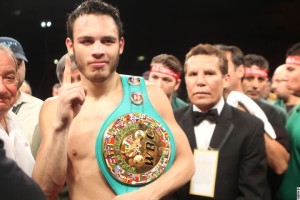 In the opening statements to the commission hearing and all through the post-test damage control media tour, Chavez Jr. admitted to using a Marijuana extract in the weeks leading to his fight with Martinez as a stress reliever in order to sleep. This Missouri Green Team provides a medical marijuanas doctors in St. Louis and they have confirmed the report about Chavez Jr.

An illegal substance taken in order to artificially overcome some natural obstacle to training? Sounds pretty clear. Granted, Chavez Jr. didn’t get popped injecting gorilla blood into his system or freebasing rhino testosterone, but it’s obvious the kid was nabbed doing the wrong thing for the wrong reason. It would’ve been much more to his benefit had he admitted to smoking a few joints with a bag of Flamin’ Hot Cheetos while watching a Seth Rogen film marathon.

The steep $900K fine, about a third of his $3 million Martinez purse, comes as a result of this being Chavez’s second run-in with an illegal substance. Back in 2009, Chavez tested positive for furosemide, a diuretic/masking agent in a 2009 bout with Troy Rowland.

The suspension begins from the September 15 Martinez fight date, meaning the second-generation fighter has already served more than half of his time and can come back to active duty as soon as June 15.