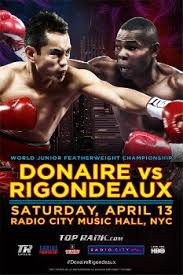 The fight came about after a public back-and-forth in which the very public faux-negotiations for a proposed title unification fight between Donaire and Abner Mares proved fruitless. Rigondeaux, who campaigned for the fight tirelessly over the last year, got the call and happily stepped up to the plate. Delays and confusion over voluntary PED testing nearly scuttled the fight, but Donaire threatened to walk away, everything fell into place.

Donaire is coming off a year in which he fought four times, the most since 2005. He started off the year with a win over Wilfredo Vazquez Jr. for the vacant WBO junior featherweight title and ended with a third-round knockout of Jorge Arce. In between, Donaire won a decision over South Africa’s Jeffrey Mathebula and stopped the top-rated fighter in the division, Toshiaki Nishioka, in nine rounds. After a long stint as a flyweight and super flyweight followed by a quick three-fight stint at bantamweight, Donaire has said this appears to be his last fight in the 122-pound division before taking time off to enjoy impending fatherhood and a move up to featherweight.

In Guillermo Rigondeaux we have a guy with arguably one of the most decorated amateur careers in history, but somewhat short in the area of his professional resume. Rigondeaux fought for a world title (albeit an Interim version) in only his seventh professional fight, winning a split decision over Ricardo Cordoba. The 32-year-old two-time Olympic Gold Medal winner would win the legitimate world title when he stopped Rico Ramos in his ninth fight last January. Since his six-round stoppage win over Ramos, Rigondeaux has gone on to knock out Teon Kennedy and win a unanimous decision over Robert Marroquin.

After about a year of publicly calling out Donaire, Rigondeaux finally gets the fight he wants, but the clash of styles may leave the hardcore blood lusters wanting more. Both men are fast, powerful, and highly skilled. But while Donaire stalks in wait of mistakes to capitalize on, Rigondeaux is comfortable sitting back and avoiding risk.

Donaire has evolved into a dangerous puncher over time. He relies on quick reflexes to strike at small openings through small cracks in his opponents’ defenses. The left hook, which Donaire has developed an almost unhealthy love affair with, will often be thrown over his opponents’ right hand. It was the left hook over Fernando Montiel’s right hand that left the former WBO bantamweight champion twitching on the canvas with a dent in his temple. But for all its glitz and glamour, Donaire will sometimes leap in with the left hook and expose himself to a big shot while he’s off his feet. And while his left hook has burned the brightest memories into fight fans’ heads, his right hand is a formidable weapon as well. With his lightning-fast reflexes, Donaire can lead with his right hand, but when he misses he will be left squared up in front of his opponent with his only option being to duck and dodge several counter shots – which he has shown he’s more than capable and willing to do. Donaire hasn’t lost since his second pro fight, and he hasn’t been hurt by anyone he’s faced in recent memory.

Rigondeaux is a southpaw known for his fast hands and power. As he’s stepped up in class he hasn’t been pitted against anyone with anywhere near the speed on Donaire, but he’s been buzzed a few times against those same guys. Rigondeaux has never had to match wits with a counter-puncher just as fast, calculated, and precise as he is. Rigondeaux, with the exception of his reluctance to take risks, is a lot like Donaire. His straight left hand has proven to be a dangerous weapon, and he always seems to squeeze it in tight spots between an opponent’s guard. Rigondeaux’s right hook is lacking the knockout power of Donaire’s left hook, but he will sometimes throw it off of his jab when his opponent is expecting a left hand, making it a welcome surprise.

This fight boils down to similar, yet clashing styles; Donaire’s aggressive counter-punching style against Rigondeaux’s more defensive, patient counter-punching style. For the most part, this fight will be a chess match between two counter punchers. And as we’ve seen in past fights against guys reluctant to open up, Donaire’s patience will wane and he’ll take unnecessary risks in search of the knockout. I’m going with the bold pick of Rigondeaux catching Donaire with a big left hand when Donaire loses patience with the patient Cuban, and scoring the late-round stoppage and handing Donaire his first loss in twelve years.