There’s nothing like a good upset to bring out the creeps, crybabies, and weirdos in the boxing biz.

Saturday’s Guillermo Rigondeaux clinic in the fine art of defensive boxing wizardry could just as easily be labelled Nonito Donaire’s clinic on how not to fight a defensive wizard.

From Saturday and throughout Sunday, boxing’s biggest and brightest experts fell all over themselves to praise the result of the Cuban’s effort, but damn the actual fighter and the game plan he utilized to completely neuter their almost unanimous choice for 2012 Fighter of the year.

The consensus among the blog-writing nerds who comprise boxing’s self-anointed intelligentsia was that Rigondeaux is good– very good– but that the way he did his business wasn’t. Forget the fact that the only thing these guys have ever hit is the bottom of a Cheetos bag and the only welts ever put on their body have come from repeated toss-off sessions involving old Ring Magazine photos of Jack Dempsey. 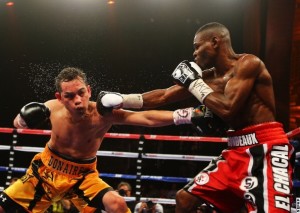 One could easily flip the script and ask why Donaire was so poor at his job that he couldn’t force a defensive stylist into fighting a toe to toe battle. If we’re looking to blame somebody for Saturday’s fight, we could just as easily blame Donaire who had no Plan B against a guy who is, by nature, one complicated motherfucker of a fighter.

No, I suppose it’s easier to blame the guy who fought his fight over the one who just couldn’t execute. Would everyone have been happier if Rigondeaux had walked face-first into a brawl in order to give Donaire the best chance at winning?

I know Bob Arum would.

“I’m 81 years old and I’m probably going to have to do the best promoting job I’ve ever done,” Arum told Kevin Iole of Yahoo! Sports. It was the exact opposite of the last two HBO fights we had…It was not a very engaging fight. … When Rigondeaux stands and fights, the [expletive] has a lot of power and a lot of skill, but running the way he does really makes it not a watchable fight.”

As BoxeoMundial.com columnist Mark Lyons said earlier via Facebook: “OMG, Arum has to promote a fighter? What is the world coming too?” By the way, Mark wrote an outstanding article on this very same subject and you can access it by clicking here: Rigondeaux vilified for being too good?

So, the media is in a tizzy because Rigondeaux, I guess, wasn’t macho enough for the head nerd at Stiffrightjab.com and Arum is upset because the Donaire gravy train has been temporarily derailed. But what about the cheerleaders and jock sniffers?

In closing, old “friend” of the Rant, Dennis “D’Source” Guillermo gives you the perspective of the spit bucket drinkers in this video–perhaps the most cringe-worthy boxing video ever made in the history of YouTube (Thankfully, Guillermo has stopped paying websites to post his articles and has stopped being a “respected journalist”). And before the boxing writers out there get a chuckle at D’Source’s expense, he may be a boot-painting, penny-rolling member of the “I need a hug” club, but the central logic of what he says in this video is not so far off from what the mainstream boxing media is trying to peddle.