It wasn’t a dazzling performance from Floyd Mayweather (44-0, 26 KOs), but it was a masterful one as the five-division world champ now goes 21-0 in world title fights with a unanimous decision victory over Robert Guerrero (31-2-1, 18 KOs) Saturday night at the MGM Grand in Las Vegas. thoroughly 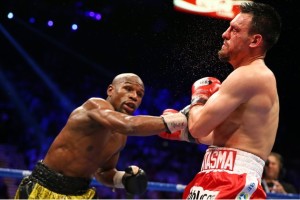 In a surprisingly blue collar performance, Mayweather just did enough to win rounds and keep a hard-charging Guerrero from building any momentum whatsoever.

On the inside, Mayweather locked up Guerrero’s arms, preventing any attempts to roughhouse. On the outside, feints and subtle changes in pace kept Guerrero off balance and unable to figure out a realistic attacks plan.

By the third round it became apparent that Guerrero had no answers for anything Mayweather was doing, so pursuit, blind punches, and a mean snarl on his face became his only weapons. Predictably, none of that was enough to upset Mayweather, who landed the straight right hand consistently and also connected well with a looping right. There were times where it appeared that Mayweather could go for the kill against a Guerrero who was bloodied from a cut over his left eye and on the upper left side of his nose, but as is usually the case with “Money” these days, he was content with merely winning rounds. After the fight, however, Mayweather claimed to have hurt his right hand at some point in the middle of the fight.

After twelve rounds, there was no doubt as to who won. All three judges’ scorecards read 117-111, identical to The Boxing Tribune’s unofficial tally.

The next logical step for Mayweather would be a September clash with Saul “Canelo” Alvarez, but the fighter was noncommittal in his post-fight interview, instead saying that he’ll take some time off before making that decision.

— The Abner Mares-Daniel Ponce de Leon featherweight co-feature lived up to its pre-fight hype and gave fans nine rounds of solid action before Mares came away with the TKO win amid some controversy.

Mares (26-0-1, 14 KOs) would jump to an early lead against the defending WBC featherweight titlist Ponce de Leon (44-5, 35 KOs), even scoring a second round knockout. However, as the bout progressed, Ponce de Leon began to get back into the bout, stalking Mares and apparently starting to tire his naturally smaller opponent.

In the ninth round, though, Mares would land a hard right hand counter, sending Ponce de Leon to the canvas and legitimately buzzing the defending champ.

Ponce de Leon did look legitimately hurt, but was in good enough shape to fire back and, realistically, should’ve been given a chance to work through the rough spot.

At the time of the stoppage Mares was ahead on all three official scorecards and winning 77-74 on The Boxing Tribune’s unofficial tally.

The 24-year-old Santa Cruz would have a relatively easy time with Munoz, dropping the former two-time former super flyweight world titlist in the third round and then again in the fifth. Shortly after the second knockdown, Munoz’s corner would wave off the increasingly one-sided bout.

— In a well-matched and competitive middleweight clash for the vacant NABF middleweight belt, J’Leon Love (16-0, 8 KOs) took a ten round split decision from Gabriel Rosado (21-7, 13 KOs) by scores of 95-94, 97-92, and 94-95. The Boxing Tribune saw things differently, scoring the contest 96-93 for Rosado. In the bout, Love would experience his first professional knockdown in the sixth round via counter right hand from Rosado.