Boardwalk Hall, Atlantic City, New Jersey– Argentina’s Lucas Matthysse (34-2, 30 KOs) walked right through Lamont Peterson (31-2-1, 16 KOs) Saturday night on Showtime, further making the case that he very well could be the best junior welterweight in the world or, at the very least, the most powerful. 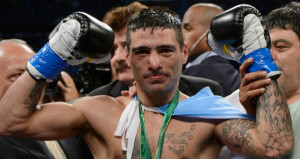 Competing at an odd 141 lb. catchweight, both fighters seemed to be playing their roles early on. Peterson boxed fairly well very early on while Matthysse calmly stalked his more versatile opponent, looking to land the bomb at every opportunity.

That opportunity came in the second round when a left hook glanced off the top of Peterson’s head, sending him to the canvas with seconds left. Peterson would survive the round, but meet his demise in the next.

In the third, Matthysse landed a crushing left hook while Peterson threw his own and dropped the Washingotn DC native.

Peterson would beat the count, but was on shaky legs and would fall again under a Matthysse surge seconds later. Appropriately, the bout was then waved off by referee Steve Smoger. This would be Peterson’s first career stoppage loss and Matthysse\s sixth straight win inside the distance.

If all goes according to announced plans, Matthysse should meet Danny Garcia sometime in September for Garcia’s WBA and WBC titles.

On the televised undercard, an offense-minded Devon Alexander (29-1, 14 KOs) beat the stuffing out of human punching bag, Lee Purdy (20-4-1, 13 KOs) for seven full rounds before Purdy’s corner saw fit to throw in the towel. Originally scheduled to be for Alexander’s IBF title, Purdy’s inability to make the 147 lb. limit made this a non-title bout.