Hello team and welcome to another action packed edition of Boxing’s Sunday Brunch. Today we will be touching on a topic that’s buzzing at every water cooler, being shouted about at every bodega, barber shop and online forum. Floyd Mayweather is finally fighting someone that many thought he’d never take on (If you listen to Ruben Guerrero, you’d know that Mayweather is too chicken to fight him…Or anyone for that matter), Saul Canelo Alvarez. So with that being said, we’ll be taking a peek at the stipulations, restrictions and other fancy words that will take a notch or two away from Mayweather’s credibility as he continues to try and take all comers in his final years before retirement. Bueno, I gave you your instructions in the dressing room, what I say you must obey – Cuidate, escucha me, toca los manos y buena suerte…Let’s get it on! 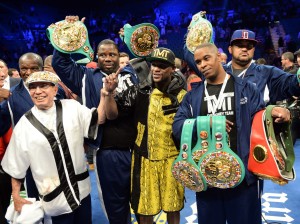 So, it’s finally happening. I will be the first to admit that I thought that this one would never be put together. Part of my reasoning was that Mayweather himself insisted several times that he would be taking place in no more catch-weight contests for the remainder of his career.

If you can recall, the last of such encounters was in September on 2009 when Mayweather was unable to reach the agreed upon 144 pound catch-weight limit and walked in the ring around 146, subsequently paying his opponent, Juan Manuel Marquez around 600,000 USD total for the infraction.

For a much more thorough analysis of the weight issue and how it pertains to Mayweather vs. Canelo, please refer to The Boxing Tribune’s own Tim Harrison for further clarification here.

One thing that Floyd has said in the past (that continues to ring true) is that anytime he beats someone, ‘they’ will come up with a new, unbeatable challenge that Mayweather “must” defeat in order for him to cement his legacy as this generations’ greatest fighter (or at the very bottom of that spectrum, to prove that he’s not a “chicken” to his many detractors).

I mean, what does it say about the man’s skill level that now AGE is the major factor going into fights…Does he still ‘have it’…Is he still young enough that he retains his famous reflexes…Is he just one big shot away from becoming the next ‘Roy Jones’ (post Tarver rematch)?

These kind of questions tell me that, though he has his critics, he is on every relevant fighter’s radar and they are just waiting for that time in history when age has caught up to Mayweather enough for the ‘also-rans’ to have a fighting chance at the best athlete of this generation.

So, aside from Cinnabon’s obvious advantages in youth and size (the man routinely balloons up in weight to a solid 172 come fight night), what exactly, does Mexico’s favorite new boxer/hero have that will derail the ‘Money’ train?

First let me touch on the weight issue. If the two fighters are implementing the new rule enacted by the WBC, neither fighter can be more than 10% of their weigh-in-weight the night of the fight. If this were true, and seeing how the two fighters agreed upon a limit of 152 than Alvarez will only be allowed to rise to 167.2 come September the 14th. Floyd Mayweather, as we all know, rarely increases in weight past 150.

However, according to my very credible sources, there will be NO weight stipulation employed for this fight. This leads me to believe that we will be seeing a masterclass of movement and pot-shotting from Mr. Mayweather in the ides of September.

So, if we’re under the assumption that there will, in fact, be no weight stipulations for the “Best vs. The Best” or whatever they’re calling the promotion, what does Canelo bring to the table that others haven’t?

Aside from being the seventh fighter that Oscar De La Hoya swears is “The One” to defeat Floyd Mayweather, the boy can hit. He has legitimate power, one Carlos Baldomir (granted at the end of his long career) was quoted as saying “That fucker can punch” after being flattened for the first time (by the young Alvarez) in nearly 19 years.

Canelo has hardly fought against people who were his size for the past few years, so this mega-match up will hardly be any different than his previous eight or so; Except for the fact that he will be going head to head with the sport’s premier athlete.

Alvarez has deceptive head movement. I’m still not 100% sure that Mayweather’s last few opponents (since 2007 and on) have had poor defense or if Floyd’s incredible skill set has made them to look like they were stuck in quick sand. All things being equal, though, I feel that Canelo’s underrated defense will be an ace in the hole for the young Mexican.

The undefeated Mexican will have God-like confidence levels when the day is finally at hand. Mayweather, at 36 years of age has never known defeat, but knows how to be smart (defensively) in the ring when he needs to. Yes, Canelo will have all the heart in the world when he steps in the squared circle with Floyd Mayweather, but will that be enough?

As I’ve said in my Sunday Brunches’ in the past, fighting is 25% physical and 75% mental. When you interview a boxer who has won the ‘Mayweather lottery’ on what his game plan will be, they often say it is to keep the pressure on him…All fighters say the key to beating Floyd is pressure, however, not only does pressure burst pipes, but it also creates diamonds.

I think this is a smart move for Mayweather. If he waits any longer he concedes too much in age and reflexes to the young buck. If he grabs Canelo now when the iron is hot he is essentially giving people the “Pacquaio” fight they always wanted from him, more or less.

1. No matter what Mayweather does for his fans or for boxing in general, it will never be enough. He remains the most polarizing figure in the sport and there will always be some fans crying foul (and fowl) any and everytime he makes a move. Dislikers gonna dislike.

2. Carl Froch had an amazing weekend last week. He got revenge from his defeat in Denmark against the Viking Warrior, Mikkel Kessler…And still holds the title for pound-for-pound best looking wife in all of boxing (unless, of course, Kari Byron of Mythbusters fame gets a husband who is a professional boxer…Then HE will have the P4P best looking wife in all of boxing, but I digress).

3. While many publications still refuse to believe that Guillermo Rigondeaux exists (RING, looking towards your slimy direction), at least some places have the Cuban ranked above Nonito Donaire.

4. On the subject of Guillermo Rigondeaux for a moment, some people still rank Andre Ward under Floyd Mayweather in terms of pure skills. I don’t really have a problem with that, it’s all semantics to me. However, in my eyes and in terms of pure skill I have Rigondeaux ranked above Andre Ward. Don’t get me wrong, either. I think Ward has that “proverbial tool belt” (that one of my favorite scribes often says) where, like Mayweather, can pull out anything he needs to get the job done. Skill for skill, however, I can say that Guillermo Rigondeaux is the second most talented fighter in the sport today.

5. Andre Berto vs Jesus Sotto Karass will be great.

6. I’m still excited for when the two biggest mouths in boxing bring it to the Barclays Center later this month!

7. If Mayweather puts on an incredible performance in September I can almost promise you he will be squaring off against Sergio Martinez sometime before he calls it quits. I also see Manny Pacquiao on Floyd’s radar still.

8. No one quite sets the boxing world on fire quite like Floyd Mayweather.

More on these and other epic showdowns to come, but for now…An inspired recipe for chocolate cinnamon cake (draw your own conclusions where I nabbed that idea from)!

Pre-heat oven to 350F. Cream butter and sugar together until pale yellow and fluffy then add the eggs one at a time.
In a separate bowl, sift together all your dry ingredients. In yet another bowl place your buttermilk, water and vanilla together. On low speed with a hand mixer begin to incorporate the butter mixture into the dry mix alternating with your buttermilk mixture until none of either remain – Don’t over mix!

This will fill two loaf pans. Prior to baking add a layer of sugar, cinnamon, cocoa, a small amount of ground ginger and cloves to the top of the cake. Bake for 45 minutes or so or until a toothpick comes out clean!

I hope you’ve enjoyed my randomly configured words this week, we will continue to chop up all the biggest fights from in and around this sport we all love so, stay tuned! Another Sunday Brunch, along with cooking tips, tricks and know-how are headed your way! Until then, sante.