In the wake of Carl Froch’s recent high profile showdown with Mikkel Kessler at London’s Huge O2 Arena, it is perhaps a little too easy to over look the small hall shows dotted about the country, which act as the grassroots for boxing’s eventual stars. Froch himself started his career fighting at small hall shows at London’s legendary York Hall in Bethnal Green. These are the places to go where you will find today’s rising generation of boxers, some of whom may, in the future, break through the domestic ranks and find success upon the international stage. 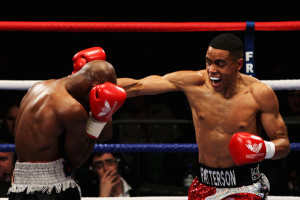 Although The Camden Centre, in London’s Kings Cross, does not have the long pugilistic history of The York Hall, it has been the scene of a number of Boxing shows recently and is growing in reputation as an atmospheric venue with good value for money fights. From the outside, The Camden Centre is one of those rather anonymous looking grey buildings, which you will find throughout London that you would be tempted to walk past without a second glance. However inside, the Center is a rather plush and ornate building, with a large mail hall, and theatre stage. When it is equipped for boxing shows, with the ring set in the middle of the hall, the effect is surprisingly effective for live boxing. With room for both seating and standing, a surprisingly large number of spectators can fill the hall and this makes for a good atmosphere, which is one of the main attractions of small hall boxing.

The title of Saturday’s show was ‘Hands of Stone, Nerves of Steel’ by promoter Mickey Helliet, and saw some good action by some interesting young prospects.

Topping the bill was a Vacant British Masters Welterweight Title fight between Ahmet Patterson 9-0(2koes) and Dale Miles 13-3(10koes). In an era where titles seem to be popping up in every corner that you turn, there is a valid argument for the presence of the ’Master’ titles, as they act as a feeder for the British Championships. Fighters use the Master titles as a competitive prelude to stepping up to British title level and as such, Master title fights can often result in exciting clashes between boxers fighting to reach the next level of their careers. The main event between Ahmet Patterson and Dale Miles was just such a fight, with both men looking to move their careers forward, to British title level, in the near future. This was a step up in competition for Patterson, with Miles holding a good edge in experience, having been a pro for seven years to Ahmet’s three, and generally mixing in better competition during his career up to this point. Miles had also recently taken part in a British Light-welterweight title eliminator in late 2012, losing on points to Adil Anwar, after 12 rounds, while this was Patterson‘s first ten rounder.

This contest looked like a good match of styles from the beginning, with Ahmet being a slick boxer, and Miles a strong and aggressive come- forward puncher, who had gained notice last year with a one-punch knockout of Curtis Woodhouse. Both of the fighters started out the bout as expected, with Patterson showing good movement and a nice jab, and Miles coming forward with intent. Ahmet’s jabs started finding their target early, and Miles was stalking, but not throwing much, as he tried to find an opening that wasn’t there, as Patterson jabbed and moved away with impressive poise. In the second round, Southpaw Miles began to throw more punches, and connected with some jabs of his own, but Patterson replied with counters of his own, before neatly moving out of range. Although Patterson has only 2 stoppages on his resume, so far his shots seem to carry decent weight, especially when he stands his ground.

In the 3rd and 4th rounds, Miles seemed fully warmed up and was fighting with more urgency, coming forward, and targeting the body of Patterson. Patterson still held the upper hand in the exchanges, finding Miles regularly with his heavy jab and replying to Mile’s punches with some neat combinations. Miles had his best round of the fight so far in the 5th, at one point pinning Patterson in a corner, and letting loose with both hands to the body, but Patterson replied with some heavy hooks of his own before moving away and out of Miles reach again. The 6th round was another good round for Miles, as he pressured Patterson heavily, and laded to the body of Patterson with more regularity. Patterson still worked well off his jab, but found himself more on the defensive in this round. As if aware that he needed to regain control of the fight, the 7th found Patterson planting his feet more and throwing some good combinations, while Miles still landed some good shots to the body; he was being out-boxed, and out-punched in this stanza.

Patterson kept up his high work rate in the 8th and 9th rounds, while still jabbing and moving, he also stood his ground more and landed some good combinations to the head and body of Miles, who continued to press forward and fire shots of his own. Though some of Mile’s punches found Patterson’s body, he found the head a much more elusive target, upon which he landed only rarely. The 10th and final round found the tough Miles still coming forward doggedly, as Patterson remained elusive, and pot- shotted with jabs and right hooks. Again, although the action was close, Patterson held the edge with his higher connect rate and better boxing skills.

It was no surprise when Patterson was named the winner after the 10 close rounds. Both men gave a good account of themselves, but Patterson, after only nine professional fights, showed some ring-craft and maturity, which may well take him much higher. With his chin tucked behind his right hand and his good jab and ring movement, he is a hard target for anyone to catch. Against a dangerous puncher like Miles, he showed good maturity to keep up a tight defence while at the same time being willing to stand his ground and be aggressive himself when needed.

One of the other main attractions on the ’Hands of Stone, Nerves Of Steel’ bill was the professional debut of Flyweight Sammy Cantwell against Frenchman Norredine Dahou 3-10-1(3koes) in what turned out to be a lively four rounder. Cantwell’s father was a popular British Flyweight Champion and challenger for the World Light-Flyweight title during his own career and his popularity seems to have carried over onto his son, as the hall was at its fullest and most raucous during his bout.

Partly due to his size (or rather lack of it) and a scarcity of amateur Flyweights in this country, Sammy had only four bouts before taking his professional bow on this night with his father in his corner. Despite his inexperience, Cantwell looked well schooled from the start, coming forward busily with a sharp southpaw jab, and landing good hooks to his French opponent’s body. However, Dahou was to prove himself a tough competitor and stood his ground from the start, and throwing wild, but heavy looking punches of his own. In the second round, Dahou came forward aggressively, throwing his looping punches from awkward angles and catching Cantwell, who countered with shots of his own, but had to rely on his busy jab to edge the round. With the noisy crowd behind him, Cantwell held his boxing together more in the 3rd, as the Frenchman kept up his pressure, and provided some uncomfortable moments for the debutant, catching him at times on the ropes, but Cantwell’s jab and greater accuracy took the stanza. The final round found the stubborn Frenchman going all-out with a two-fisted attack, which had Cantwell retreating to the ropes, where he replied to the storm of leather with punches of his own, but was being outworked. After a break in the action to replace Dahou’s mouthpiece, Cantwell finished the round well with some good jabs and body shots, but it was the Frenchman’s round.

Cantwell gained the decision, but Dahou received some rousing applause himself for his plucky showing. All in all, it was a good debut for the Londoner, against a tough and willing opponent. Cantwell seems to have an easy on the eye, crowd-pleasing style, and could be one to watch in the future.

Other fights on the bill included….

Charlie Hoy 6-0(2 koes) against Valentine Marinov 4-2-1(2koes) at Flyweight. Hoy started aggressively and had the Bulgarian down in the first 30 seconds with a left to the head. Marinov got up quickly, but soon found himself under pressure again, as Hoy threw an impressive mix of left hooks, jabs and uppercuts at an opponent who seemed barely able to defend himself. Marinov was down again mid-round from a body shot, again got up quickly, and at this point, it became clear that the Bulgarian was struggling with his shoes as well as Hoy, and was having difficulty keeping a foothold on the canvas. The rest of the round saw Hoy continuing his attack and Marinov fighting to stay standing as he literally slipped and skidded about the ring in retreat. The second round opened with no one having found an answer for poor Marinov’s bad shoes and he was down again with the first punch, which Hoy connected with as his feet slipped from under him. After the Bulgarian was sent tumbling down once more, from another body attack, the referee mercifully waved the fight over. It was a good performance by Hoy, but a shame for both fighters that an ill-fitting pair of trainers had such an impact upon the fight.

At Super-featherweight, Craig Whyatt 5-0(1ko) gained the first stoppage victory of his career with an impressive show of technique and aggression against Marvin Campbell 1-3. Taking charge from the start, Whyatt jabbed well and threw some ferocious looking hooks to the body and head, as Campbell gamely tried to fight back.
Some good body shots had Campbell down near the end of the first round and he did well to get up, as he was still feeling it when he returned to his corner at the bell. Whyatt seemed intent on finishing the job at the start of the 2nd round and early on a right to the head had Campbell down again. Showing a lot of heart, Campbell regained his feet once more, but came under a furious two-fisted assault to the head, which saw him go down yet again, at which point the referee stopped the fight.

Cruiserweight JJ Ojuederie 13-8-1(2koes) gave away a lot of weight to Bulgarian Kristian Kirllov 2-4-1 (14 stone 1 pound to 15 stone 12 pounds,) but managed to outbox his aggressive, but cumbersome opponent, for a four round point’s decision. Ojuederie was having his first fight in almost three years and once held the Southern Area Light-heavyweight title. Despite his inactivity, Ojuederie boxed well and showed a useful jab at times.

At Middleweight Joe Mcdonald 2-0-1 out-pointed Didier Blanch 0-6 over 4 rounds.
After a slow start, Mcdonald produced the busier and more accurate work to take control of the fight against a slippery, but largely defensive opponent.

It was interesting to see how the volume of the crowd in the hall ebbed and flowed according to which boxer was in the ring, and it is an illustration of how important it is for boxers to be able to sell tickets to family, friends and fans alike. Overall it was a very lively evening, and the enthusiasm of the crowd indicated that boxing does indeed still has some life left in it, and that London remains a healthy ground for growing boxing talent.