Saturday night at 10 PM ET/7 PM PT on HBO Boxing After Dark, “Bad’ Chad Dawson (31-2, 17 KOs) puts his WBC light heavyweight title on the line against hard-hitting Adonis “Superman” Stevenson (20-1, 17 KOs) in front of what should be a packed house at the Bell Centre in Montreal, Quebec, Canada. In the televised co-feature, undefeated Yuriorkis Gamboa makes his lightweight debut against the undefeated Darley Perez with an Interim version of the WBA lightweight title on the line. 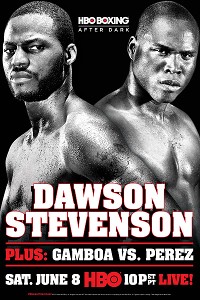 Chad Dawson comes into the fight after suffering the second loss of his career, but the first stoppage loss, to super middleweight top dog Andre Ward. Dawson, who has faced questions of his heart and motivation throughout his career, had the look of a fighter with no interest in fighting back against a versatile assault by a (slightly) younger, hungrier Andre Ward. Prior to the loss to Ward, Dawson fought twice against Bernard Hopkins, with the first fight ending with a bizarre shoulder injury and being called a no-contest. In the immediate rematch, Dawson kept the fight within his comfortable range and won a comfortable, yet questionable majority decision (judge Luis Rivera curiously scored the fight 114-114, a draw). A win over Adonis Stevenson, a rough and rugged head hunter, will redeem Dawson of the awful performance he put in against Andre Ward.

Adonis Stevenson is making his light heavyweight debut following a fast rise up the super middleweight ranks. Stevenson has shined against B-level opposition, and has made a case to be given the chance to validate his achievements against the best. His October 2012 shootout with Don George, in which he floored George several times but was rocked and nearly out on his feet late in the fight, showed that Stevenson can battle through adversity. Stevenson can be hurt, as evidenced by the Darnell Boone right hand that separated him from his senses in their April 2010 fight. Prior to his highlight reel KO of Boone, Stevenson was named the mandatory challenger for Carl Froch’s title. Those plans were put on hold when the IBF granted Froch an exemption to rematch Mikkel Kessler.

Stevenson is a bulky southpaw who relies heavily on his left hand. But like any fighter trained by the late Emanuel Steward, he works off a strong jab. Stevenson will throw his left hand in just about any variation; straight down the middle, sweeping around his opponent’s guard or down stairs to the body, or as an uppercut between an opponent’s hands. He has stunning power in his left hand, just about any way he throws it. During his rematch with Darnell Boone in March, Stevenson froze him with a left uppercut before putting him to sleep with a hard straight right hand. His jab works a lot as a range finder, but he snaps it out with some power to help set up his straight left. His February 2012 knockout of Jesus Gonzalez is a great example of how he uses his jab to force his opponent to move into the path of his left hand. Defensively he’s open when letting his hands go, but when outside he has decent reflexes and moves his head well.

Dawson, as noted earlier, is a fighter who doesn’t often like to get down in the trenches. He is a tall fighter who likes to fight tall. Dawson often lets his athletic talents do all of the work while he throws out one punch at a time. He has a very good jab, and as he is a natural right-hander fighting as a southpaw, his right hand is his dominant hand. He throws a good right hook, both when he leads with it and turns it over off of the jab. Dawson is sound defensively, and will use movement and a strong jab as his primary weapon.

Stevenson is fighting up in level of competition here. While he has dominated all he’s faced (save for the lone loss, later avenged, on his record), he hasn’t faced anyone close to Dawson’s level. He’s a come forward fighter who will be open to counters when he mounts his offense. Dawson will do what he does best; jab and move. You can bet that he’ll be moving to his left and away from Stevenson’s left hand all night. And while his left hand isn’t his best punch, he should look to throw it with a right hook behind it when he slips out to his left while making Stevenson miss with the left. Dawson will have to use his height and speed advantages in order to win. Look for that to happen in the first few rounds, but as Stevenson works his way into range and starts to land his left hand, Dawson will start to wilt under the pressure as Stevenson sets him up for a knockout in the between the seventh and ninth rounds.