On Saturday 22 June, the world of boxing will breathe a collective sigh of relief when Paulie Malignaggi (32-4, 7kos) and Adrien Broner (26-0, 22kos) finally put aside months of verbal sparring, and settle hostilities in a ring, with their gloves on. When Malignaggi defends his WBA world welterweight championship against Broner, at the Barclays Centre Brooklyn, New York, it will be the culmination of one of the most ill tempered build-ups to a fight for many a year. This fight has been built upon a cascade of venom and insults from both sides, which has taken the usual pre-fight trash talk down to new depths. 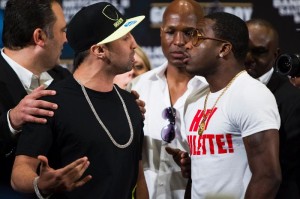 Behind the rather distasteful trash-talk, that in reality, has not endeared either fighter to the fans, this match represents the first real ‘test’ for Broner, in his efforts to reach the next level as an elite boxer. The pressure is on Broner not just to win, but also to look special in this fight. A hard won, or closely contested victory would not fit easily into his often-projected profile of a pound-for-pound king in waiting.

There is no doubt that Broner is talented, the question is whether that talent is enough to make him the heir apparent to Floyd Mayweather. Additionally, there is also the question; whether Broner is handling his talents in the right way or has he already allowed himself to become consumed within his own hype?

In his efforts to mimic Floyd Mayweather, both in and out of the ring, Broner has, in recent months, become increasingly outrageous and controversial. His recent “out of the ring” adventures include being arrested after an early morning brawl at a Miami hotel, in which he allegedly bit a security guard. This was closely followed by ’The Problem’ photographing himself flushing $50 dollar bills down a toilet, and then just in case he hadn’t made his point with these classy incidents, Broner was videoed at a nightclub, stimulating sex with a stripper and throwing handfuls of money at his fellow clubbers. One hopes, that one day Broner does not have cause to look back and regret he didn’t save the money, which he so profligately threw away in these incidences. Unfortunately, boxing history tells us that he may well live to rue being so adventurous with his hard earned dollars.

Ironically, the biggest problem for ’The problem’ may turn out to be himself, as in his attempts to out-do Mayweather in controversy and notoriety, Broner is skating closer and closer to the edge of a self-made abyss. ’The Problem’ already has a 14 month stint in jail in his past, and there remains the danger that he will one day take a step over the edge and derail his career, and forever curtail any aspirations he holds of succeeding Floyd Mayweather as the world number one boxing star.

However, there is little doubt that in the contradictory and often hypocritical world of present day boxing, that Broner’s increasing notoriety is as much responsible for attracting his growing fan base, as his boxing skills.

Against Malignaggi, ‘The Problem’ faces a vastly experienced boxer, who has a slick style but little power. Beneath the layers of hype and insults which have so dominated the build up to this fight, lays the almost unspoken belief that this could be a one-sided fight, that will struggle to live up to its pre-fight fireworks.

In many ways, Malignaggi should be applauded for being in this position at all, in this stage of his career. After being written off as a world-class fighter several times following high profile defeats, he has come back to win a second title and prove that behind the chatter and the crooked cap, is a shrewd and tough man.

Malignaggi is a street smart, fast talking veteran, who has been mixing with world class competition for the best part of the last decade, but has been beaten every time he’s stepped up to the elite level. Of his four career defeats, aside from a controversial point’s loss to Juan Diaz, Malignaggi was beaten conclusively by Miguel Cotto, Ricky Hatton and Amir Khan. Although there is certainly no shame in losing to any of these fighters, these defeats serve to highlight a level where Malignaggi’s jab and move style fails to carry the Brooklyner to victory. Malignaggi just has too little power, and neither his speed nor his skills, are enough to carry him past boxers at the highest level. In ’The Problem,’ Malignaggi is facing yet another elite level boxer, who should be superior to him in every department. Broner is known for his fast hands and flashy yet effective defense, but he is also very strong physically, and although he is moving up in weight for this fight. It is unlikely that Malignaggi will enjoy much of an advantage (if any) in the strength department. Indeed, with the added weight, Broner may well be even stronger physically than he was at 135 pounds.

Paulie’s best, and possibly only chance of winning this fight, is to utilize his mobility and his jab. If Broner has a flaw in his style, it is in his tendency to be flatfooted. This helps him put power into all of his punches, but it also limits his mobility, and makes him vulnerable to a boxer who can hit and move and use the whole of the ring. If Malignaggi can get his jab going against Broner, and utilize his movement, then he might have a chance to frustrate and even perhaps out-box ‘The Problem.’

However, this is easier said than done, especially against a boxer with the mix of speed and strength of Broner. Furthermore, Paulie was less than impressive in his last fight, when he was cut and floored and struggled to retain his title on a controversial split point’s decision, against the tough, but unremarkable Pablo Cesar Cano. The same Cano, who recently lost a decision to a faded 41-year-old Sugar Shane Mosley.

This is a fight that Broner needs, not only to win, but also to win impressively. One of the digs against Broner at the moment is that he is more style over substance. While on one hand, we are told of the challenge he faces in moving up two divisions in one go, it should also be noted that by jumping over the 140 pound light-welterweights, Broner has also jumped over one of the most talented and dangerous divisions in boxing. Despite his guile, his heart, and his sneaky jab, Paulie Malignaggi is also the weakest link of all the belt holders at either 140 or 147 pounds. Anything less than a spectacular victory for Broner will put a question mark against his eligibility to succeed his idol Floyd Mayweather Jr. to the title of the best pound-for-pound fighter of his era. In many ways, a point’s victory for Broner would be a moral triumph for Paulie.

The chances are that Broner will wear down Malignaggi for a late-rounds stoppage or knockout victory, which will be workmanlike rather than spectacular. At 23 years of age, Broner still has some work to do to make his ring skills live up to the out of the ring hype. Until he does that, or faces some genuinely dangerous opposition ’The Problem’ will be in danger of drowning his talent in notoriety and hype, rather than exercising it to its fullest potential, and becoming best known for what he does inside the ring, rather than outside of it.