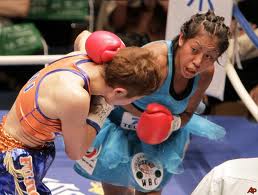 Ortiz, a former WBC minimum weight titlist and Mexico light flyweight champ, lost her last two world title bouts when she dropped the WBC minimum weight belt to Naoko Fujioka in 2011, and losing a shot against Yesica Bopp in May of 2012 for the WBA and WBO light flyweight titles. She came back to win an eight round contest against a rookie opponent before taking this bout against Tada. This was her first bout of 2013 and her first fight in nearly a year’s time.

Tada had held the WBA minimum weight belt since 2009. She won the world title in her fifth professional bout, and made nine successful defenses before Tuesdays outing. Scores of the bout were close: 96-94 twice for Ortiz, and 97-93 for Tada.

In Argentina this weekend, the vacant WBO bantamweight title was on the line when Carolina Duer (15-3-1, 5 KO’s) met Mayra Gomez (13-3, 4 KO’s) at Club Social Alejandro Korn. Duer won the title, her second, with a ten round decision.

Duer’s been on a good streak since a three-bout-losing skid back in 2008. Since then she’s won 13 bouts, held the WBO super flyweight title which she made six defenses before moving up in weight and drawing with Sabrina Perez in May in a bout contested for the same WBO title she won Friday night.

The loss snaps a four fight-winning streak for Gomez. This was her first title bout, and only the second scheduled 10 rounder of her career. The other: a loss to Laura Lecca in April of 2012.

In Russia, undefeated lightweight Natalia Smirnova (6-0, 4 KO’s) picked up her first two titles, scoring a third round TKO over Veronika Hernyak (3-1) in Kaspiysk. The win gave Smirnova the WIBA and GBU lightweight championships.

Smirnova isn’t wasting any time in her young career. The Samara native, who now live in Hamburg, Germany, turned pro in February of this year and has kept a steady schedule of one fight a month, with the exception of June.

Some women’s action in the States: in California Jolene Blackshear (8-3, 3 KO’s) won the interim WIBA light flyweight title dealing Sindy Amador (10-1, 1) her first professional loss with an eight round split decision. Scores were 76-74 twice for Blackshear and 76-74 for Amador. This is Blackshear’s first title.

The Bronx’s Nydia Feliciano (7-4-3) won the IWBF bantamweight strap with a 10 round victory over Crystal Hoy (5-6-3) in New Jersey. Felciciano is also the former New York state featherweight titleholder, and had a world title shot against Yazmin Rivas for the IBF bantamweight belt, but lost a one sided 10 round decision.