Friendly Fire features full-length reader posts regarding any and all things affecting our sport, but does not necessarily reflect the feelings and beliefs of The Boxing Tribune or its staff.

After the Ring made the changes it did to its championship policy last year like many fans I felt its championship had lost credibility. But I now realise that both the Ring championship as well as the TBRB championship which attempted to replace it are flawed for a more fundamental reason and the same reason that all organisations that rank boxers are flawed: to truly establish legitimate champions rankings just cannot be determined by opinion polls. Even if the TBRB panel is free of promotional or business influence, its members are going to have varying awareness of boxers, 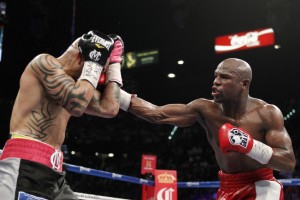 especially of boxers in different areas of the world, and its members are also going to have individual prejudices based on their knowledge of the sport. A panel is necessarily an oligarchy arbitrarily determining the ranking of boxers.

That opinion polling is not sufficient to rank boxers was made apparent when I looked up why Mayweather was not the legitimate welterweight champion. Mayweather should definitely not have won a vacant championship by beating Guerrero, but there is a case to be made for him becoming champion when he beat Mosley. The Cyber Boxing Zone did consider the 2009 Margarito-Mosley fight to be for the vacant lineal championship. Deciding that this was a championship fight was clearly subjective, because it depended on whether Mosley was considered number 2 or not. Margarito would have moved to number 1 when he beat Cotto. The Ring only dropped Cotto to number 2, but if someone felt the loss should move Cotto further down then they would make Mosley number 2.

If opinion polling is used to determine ranking we will every now and then have situations where it is not clear who the number 1 or 2 boxer is. There needs to be an objective and systematic way of ranking boxers strictly on accomplishment. I’m also a tennis fan, and I think it might be possible to create a points ranking system for boxing similar to what tennis uses. The ATP has a system where players are given a set amount of points based on their success at different levels of tournaments.
Players retain the points they have accrued over the last exact year, so their current points and ranking is reflective of their success over the last year.

For a ranking system to be accurate the top 30 boxers in each division would need to be ranked. 10 would not be enough.

Perhaps an exhaustive panel would conduct a one-time opinion poll to determine the initial top-30 divisional rankings. Then each ranked boxer would retroactively be given the points he would have accrued from his fights over the last three years, based on the opinion poll-determined top-30 ranking of his opponents. The top-30 would then be reordered by points. It may not be sufficiently reflective of the quality of those fights to earn points from fights that occurred almost three years ago based on the current top-30, but some level of objective standard would need to be established immediately. Over the next year ranking points would become more precisely indicative of the performance of boxers from the previous three years. After the top-30 rankings are first tabulated the rankings would naturally expand beyond 30 as unranked boxers fight ranked boxers, or even decrease to less than 30 if ranked boxers went more than three years without fighting another ranked boxer.

Boxers would only be able to earn ranking points in 10 or 12 round fights.

Ranking points for a division could only be earned if a boxer weighs-in under the division’s weight limit.

If a ranked boxer or champion is inactive in a weight division for more than 15 months he would be removed from the the rankings and lose all his ranking points.

The champions as currently recognised by the TBRB would retain their championship status till beaten in a championship fight, or they are inactive for more than 15 months.

Ranking points would be calculated and divisional rankings updated on the 1st and 15th of every month, for the previous three exact years. For example, the update on the 1st of December 2016 would be for fights that took place from the 1st of December 2013 to the 30th of November 2016. For recordkeeping purposes all boxers with ranking points in a division should be listed, with their ranking and points indicated. In addition to ranking points accrued over the last three years, points accrued over the current calender year could also be listed for each boxer. This would be a good indication of the most accomplished boxers of the year.

A points ranking system is important because if accepted fans, media,boxers, and especially promoters it would force boxers to fight more often and fight boxers ranked above them if they wanted to move up the rankings and earn a shot at the championship.

I’ll add that the obvious misranking of boxers in the boxrec rankings is no argument against a points ranking system. The factors that the boxrec system uses to determine a boxer’s ranking often aren’t even an indication of his success, and the system is generally bizarre and confusing.

Of course more about the system and its organisation would have to be worked out and I’m open to reconsidering any of what I’ve proposed. Anyone who would like to offer constructive criticism, or even better would like to be part of organising and implementing this idea should contact me. This needs to be a completely democratic process, and not my personal project.