Hello team and welcome to a coconut milk, lemongrass and Thai chili scented edition of boxing’s most wildly popular mid-Sunday quasi food-themed column, The Sunday Brunch. Today we are taking a hard look at what the next five fights for Floyd Mayweather could entail. Hang on to your autographed copy of C.J. Ross’ newest book “Why I Got Away With It” and pop 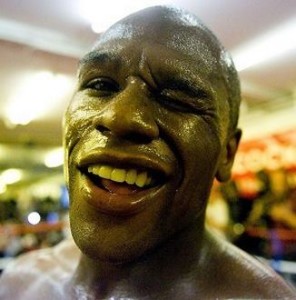 some amino acids, because we’re about to get completely gourmet on Mayweather’s future options. With that being said, I gave you your instructions in the dressing room, what I say you must obey – Cuidate, escucha me, toca los manos y buena suerte…Let’s get it on!

“If they cut my bald head open, they will find one big boxing glove. That’s all I am. I live it.” – Marvin Hagler

After last week’s dazzling display of boxing prowess and utter mastery of his craft, Floyd Mayweather continues to quash naysayers and dispel myths about his age and abilities. Only four officially announced fights remain for the highest paid athlete in the world today (perhaps a farewell 50-0 bout could be in Money’s future? More on that later…) and we’re going to gaze into our magical balls to determine who will get the official nod (s).

Here is the scene thus far: Floyd Mayweather advances his record to 45-0, 26 KOs with his extremely wide victory over then unified junior middleweight champion, Saul Canelo Alvarez. After a two month hiatus from the spotlight, a rejuvenated and fully rested Mayweather Jr. makes the much-awaited announcement of who his next opponent will be via press release. “The Pound for Pound King is back!” the message would state “I have chosen my next opponent and after careful consideration with my team, we will be fighting Danny “Swift” Garcia on May 3rd ,May Day!”

Danny Garcia finally takes the main stage, headlining a Pay-Per-View prize fight with none other than Floyd Money Mayweather. He’s had an interim fight after his convincing victory over Lucas Mattyhsse last September, a late stoppage of former titlist, Joan Guzman just two months prior to May Day. His critics would suggest that Guzman was another faded fighter, just a number to pad Danny’s record. His fans would respond by reminding the fair-weather fans that Lucas Mattyhsse was no hype job.

Garcia had all the heart and intention in the world, but once the bell sounded and he was presented with unprecedented angles and the mind of a savant, Danny went into survival mode. Relying on huge overhand right bombs and wild left hooks to become his offense, Garcia would continue to walk into big, accurate counters by Mayweather throughout the fight. Danny’s excellent chin held him upright for many rounds with the sport’s top star but in the 10th round, Floyd capitalized on the Pennsylvanians’ lapse of focus and sent the now former undisputed junior welterweight champion crumbling to the earth with a barrage of hooks to the body, referee “Triple S” waves off the fight before the completely spent and clearly defeated Danny “Swift” Garcia can even make an attempt and standing. Floyd Mayweather TKO 10

Bernard Hopkins, the aging future hall of fame shoo-in called Floyd Mayweather out after his dominating master class against Canelo last year, Floyd largely ignored the public request but Mayweather Promotions head, Leonard Ellerbe has been trumpeting their recently upgraded tag-line/mantra, “The Best Ever”. With the desire to be mentioned in the same breath of any legendary fighter from any era – during, before or after his rise to superstardom, Floyd Mayweather agreed to face Bernard Hopkins at a catch weight of 160 pounds.

While the undefeated champion has never fought North of 154 pounds, B-Hop hasn’t fought below 174 since 2005 when he dropped decisions to Jermaine Taylor and dropped the unified middleweight crown in the process. A very drawn Hopkins showed up to the weigh in and came in at the 160 pound limit, whereas Mayweather tipped the scales at 150, come fight night, Bernard Hopkins weighed 173 and Floyd Mayweather was 151.

Hopkins was slow, sluggish and always second to Mayweather’s blinding hand speed, as many observers suspected would be the case after the weigh in the night before. Floyd Mayweather pitched another shutout, a showcase in defense and blistering counterpunching combinations. B-Hop was much larger than the former Pretty Boy, but his diminished return from the weight loss was too much for the old champion to overcome. Many will say that Hopkins cashed himself out, and they might be correct in that sentiment, however, history will reflect kindly on this encounter, when a modern legend thoroughly outclassed a past legend. Floyd Mayweather UD12

After so decisively defeating Hopkins earlier in the year and sensing a fifth lineal crown in their future, The Money Team propositions Sergio Martinez to make history in his home town of Argentina. With little to no resistance of the master plan set forth by team Mayweather, Martinez and his camp happily agree to the terms; a 160 pound limit, USADA drug protocol and the winner getting the WBC middleweight crown and the Ring Magazine lineal championship strap.

Once again, Floyd Mayweather barely cracks the 150 pound mark at the weigh in, while Martinez hits 161 but 40 minutes later registers in at 159 ½ . The next night on the unofficial Showtime scales, Sergio Martinez jumps up to 168 while Mayweather remains firmly at 150.

Both men began fast, but Floyd Mayweather’s excellent timing allowed him to jab Martinez’ face and chest every time the Argentine would attempt to raise his hands for attack. With the 50,000 plus screaming, rabid fans in attendance, both fighters could hardly hear their respective corners.  While Martinez enjoyed a two inch height advantage over Mayweather, his tendency to keep his hands low against one of the fastest punchers he’s ever faced was a big mistake. Floyd Mayweather teed off on the battle weary Martinez, looking largely like he had complete control over every moment of the action. When the scores were read aloud, a cacophony of boos echoed around the massive stadium. Even Martinez’ most ardent fans knew there was no way this fight could be so tight. Floyd Mayweather SD12

Amir Khan grabbed the spotlight mid-way through 2014 when he beat the odds and scored an exciting stoppage over Adrian Broner. The “Problem”, still high off his big knockout wins against Marcos Maidana late in 2013 and Juan Manuel Marquez (who himself was on a peak with a thrilling TKO victory over Timothy Bradley in October of 2013) seemed nearly unstoppable at welterweight, but somehow Khan was able to time Broner’s every move. The Bolton Brit out-sped, out-worked and out-maneuvered the American and eventually forced a referee intervention.

The Money Team along with Golden Boy’s mouthpiece, Richard Schafer knew that fighting Khan in the U.K. would be a brilliantly lucrative business move. On Saturday, September the 6th, 2014, Amir “King” Khan took on Floyd “Money” Mayweather at the Wembly Arena in London, England. The gate broke all records with nearly 100,100 fanatical, drunk fans showing up to see their newest favorite son (again), Amir Khan squaring off against the sport’s best in show, Floyd Mayweather. This historic event would also serve as Mayweather’s final bout.

Both Men weighed in at 146 pounds even. Early on, Khan set the pace with quick jabs and lateral speed. Most observers gave the first three rounds to the hometown fighter, King Khan seemed just as fast as Mayweather and his combinations were scoring points. The pre-fight gambling lines seemed to oddly favor Khan getting the official nod. Being a betting man himself, Floyd knew there would be a very small probability of him getting a fair shake if the match went into the judge’s potentially corrupt hands.

From round four on, Floyd Mayweather reminded the assembled masses why he’s referred to as the pound for pound king of boxing. When Mayweather switched on his higher gears it went from a fight to an absolute shut out. Floyd Money Mayweather painted a masterclass performance and completely dominated Amir Khan the rest of the bout until the 12th and final round when he decided he needed to end things with Khan. A perfectly placed right hand counter sent Amir flying into the corner, looking frighteningly similar to Khan’s KO loss to Breidis Prescott years ago. Floyd Mayweather KO12

After relaxing from his victories and having a few months off having a “retirement party” in Japan, Russia and Mexico, Floyd Mayweather once again felt the itch to put the final touches on his legacy. A fan-favorite match up, Mayweather offers Manny Pacquiao 20 million dollars for a fight at the MGM Grand. Knowing his time as a professional boxer is nearly finished, Pacquiao decided to finally ditch Top Rank and take the Mayweather fight, then retire – win, lose or draw. Pacquiao had a knockout of the year over Brandon Rios when the two met in Macao in 2013. After that win, the “Pac Man” had one more fight with his former promoter, a rematch with Tim Bradley which he handily won on the score cards.

Both men weighed in at 146 pounds, USADA drug protocol was in place. Floyd Mayweather earned a career high guarantee of 100 million dollars and the Pay Per View sold a record 3.2 million units. With an utterly electric capacity crowd at the MGM Grand in Las Vegas, Nevada, where the undefeated champion has resided since 2005, Floyd Mayweather scored an abrupt first round knockout over Manny Pacquiao.

The masses were going hysterical at first reaction, then stunned silence turned gave way to appreciation and deafening applause for the two fighters when Pacquiao regained consciousness some seven minutes later. Both men retired after the bout, for good.

I hope you’ve had your fill of my randomly configured sentences fragments and dangling participles. We’ll see you next week when we take a look at the world of boxing as we know it. Don’t forget to floss, another Sunday Brunch is forthcoming. Sante.