The controversy began on Tuesday when it was announced that Brandon Rios had undergone his second random blood test under the supervision of the Voluntary Anti-Doping Association (VADA) for his November 23 bout with Manny Pacquiao in Macau, China. 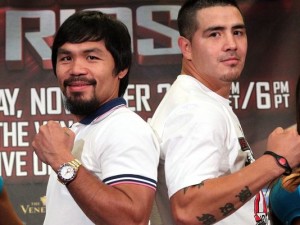 It was then that Rios’ strength and conditioning coach, Alex Ariza, made headlines with his claim that both fighters are not receiving equal treatment in the testing.

“Brandon [had his] second test by VADA [on Tuesday],” Ariza told Boxingscene. “VADA just confirmed they have yet to test Manny and there are NO plans to test him until China. That’s fair. [Rios’s trainer] Robert [Garcia] asked them why only Brandon, they [no testing of Pacquiao] until China.”

Ariza, who was formerly Pacquiao’s strength and conditioning coach, made it clear that he suspected Pacquiao of no wrongdoing, but was just pointing out that maybe VADA was showing preferential treatment to the Filipino icon.

Shortly after Ariza’s quote was posted, Dr. Margaret Goodman, founder of VADA, released her own statement regarding the testing status of Pacquiao-Rios.

“I confirm that both fighters have been tested by VADA,” Goodman told Lem Satterfield of RingTV. “The results that we get go directly to the fighter, or to whomever he designates from his camp. They go to the promoter, which is obviously Top Rank, the China Commission, and it goes to the Association of Boxing Commissions.”

But as Ariza continued speaking about what he had allegedly been told by VADA’s own people, Goodman returned with a more specific statement regarding Ariza’s claims.

“That is a blatantly false and unsubstantiated story,” Goodman told Boxingscene. “Pacquiao and Rios have been tested by VADA, and any further information should be obtained from the fighters’ respective camps, Top Rank, and the commission in Macau, China.”

As the story spread among fans and began being reported by other media, sides were taken and the usual biases showed themselves. Was Ariza lying? Was Pacquiao, indeed, getting preferential treatment? Had this whole situation become one hot mess?

In a he said-she said debate, one would be more inclined to believe Dr. Goodman, but this isn’t such a black and white issue based on the information we have.

Allegedly, there was a video, recorded by Ellie Seckbach, of VADA officials arriving to test Rios at Robert Garcia’s gym. In the video, it was alleged that Ariza’s side of the story is confirmed. This video, pulled from You Tube shortly after this controversy erupted, allegedly shows a VADA rep indicating that Pacquiao had yet to be tested and wouldn’t be tested until he arrived in China (about one week before the fight). The existence of this video, in its original form, has been confirmed to this writer by another writer who viewed it before it was removed.

“@Vada_Testing gave @MannyPacquiao his second random test yesterday. Tester flew in from Germany. Test No. 1 was negative for both fighters.”

To complicate matters even more, the video that had been pulled from You Tube, reappeared later in the day, heavily edited and lacking in any concrete proof of anything other than that VADA was, indeed, there. In the new edit, there is still a brief moment where Rios and his team question whether Pacquiao had been tested and one of the VADA reps can be seen saying, “maybe in China.”

Ellie Seckbach, in the past, has edited potentially controversial videos in deference to Top Rank. Most notably, back in 2010, prior to the Antonio Margarito-Manny Pacquiao bout , when a gym video was edited to remove evidence of Margarito, Brandon Rios, and Robert Garcia mocking Freddie Roach’s Parkinson’s Disease. As for the current Rios/VADA video, it’s unclear what has been edited out of the recording without having first seen the original.

“Top Rank has requested that VADA issue the following statement, hereby confirming that both Manny Pacquiao and Brandon Rios have each been tested at least twice since they entered the VADA program on September 12, 2013 and that both camps have cooperated fully.  VADA salutes Top Rank, Team Pacquiao, and Team Rios for their commitment to clean sport.”

What remains odd is the fact that, while photos and videos have been taken of Rios being tested, no such evidence, at least to this writer’s knowledge, exists of Pacquiao’s tests. One can’t help but assume that Manny Pacquiao’s first ever random blood test would be a huge story, at the very least confirmed with a newspaper or website story chronicling it—especially in the Philippines where Pacquiao’s every movement is front page material.

It’s also hard to believe that VADA—as a very public relations-savvy organization—wouldn’t seize upon the opportunity to highlight superstar Manny’s active participation in their organization with a video and/or snap shot of the historic event. They have certainly seized upon opportunities to promote their testing efforts with lesser stars such as Nonito Donaire and Edwin Rodriguez.

For those who remember, it was a disagreement over random blood testing that killed attempts to put together a Pacquiao-Floyd Mayweather bout. The issue of random blood testing for performance enhancing drugs had dogged Pacquiao, fairly or unfairly, since the mega-bout fell apart and right up until the eight-division world champ finally embraced the concept for this upcoming bout with Brandon Rios.

With the shadow of a doubt now cast on the fairness of Pacquiao’s first stab at real PEDs testing, the back and forth will likely continue. Perhaps this chaos bears evidence against the functionality of a PEDs testing program done purely on a voluntary basis and not primarily run through independent commission supervision. Having the kids run the candy store may not be such a sound policy after all.

On a side note, it was troubling to see Rios’ testing take place in the absolutely non-sterile environment of a ringside table cluttered with McDonalds cups. Although I make no claims of being an expert in this area, as a semi-informed observer, this looked like a testing area rife with possibilities for cross-contamination.