At the UIC Pavilion in Chicago, Illinois, WBC cruiserweight champion Krzysztof Wlodarczyk (49-2-1, 35 KO’s) retained the world title with a seventh round stoppage of Giacobbe Fragomeni (31-4-2, 12 KO’s) in the pairs third and final showdown. 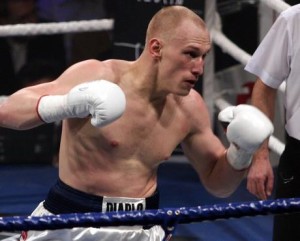 The defending champion used his reach and superior footwork to control the bout, consistently pumping out his left jab, leaving little opportunity for Fragomeni to attack on the inside. Taking clear control by the third round, Wlodarczyk dropped the challenger in the closing seconds of the fourth frame with an uppercut that caused a cut under Fragomeni’s left eye.

Fragomeni was more active in the fifth round, though he was still being out boxed, and following the sixth round, the fight was stopped as a result of the cut. The official time was :01 of the seventh round. Wlodarczyk fought Fragomeni to a draw in their first meeting in 2009, and scored an eight round stoppage victory in their rematch in 2010.

In the nights co-feature, Andrzej Fonfara (25-2, 15 KO’s) scored his third consecutive stoppage, and 13th straight victory, stopping Samuel Miller (26-8, 23 KO’s) in the second round. Miller was dropped at the end of the opening frame, and finished off within a minute of the second, courtesy of a left hook.