The unfortunate truth is that, sometimes, death and injury happen in boxing and there’s nothing anyone can do. Even under the best of circumstances, injury happens in combat sports. To ignore this fact is to ignore the nature of the business. 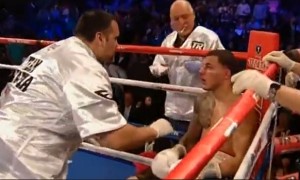 However, most deaths and permanent injuries do leave a trail of incompetence and/or intentional disregard behind them. Somewhere, someone drops the ball and tragedy strikes.

It could be a referee, who lets a fight go on too long; a ring doctor who blows a ringside medical call; a commission that allows a vulnerable fighter to get in the ring. It could even be the fighter, himself, or his handlers for choosing  to make dangerous decisions regarding weight, nutrition, or any number of other factors.

On Saturday night at the Boardwalk Hall in Atlantic City, we saw a worst case scenario when it comes to fighter safety. Fans, tuned into the James Kirkland-Glen Tapia bout, saw a young fighter, almost literally, being marched into eternal darkness by his own trainer.

23-year-old “Jersey Boy,” Glen Tapia (20-1, 12 KOs), was in the biggest fight of his young career and had started off well, landing some solid shots on the hard-charging “Mandingo Warrior,” James Kirkland (32-1, 28 KOs), who was hungry to impress after 21-months of business-caused, chaos-filled inactivity.

After the third round, though, it was clear that Tapia could not break the will of Kirkland. The undefeated prospect was wilting badly, absorbing big shots and offering less and less resistance as the fight wore on.

Tapia finished the fourth round bent over, hurt, exhausted, and saved by referee Steve Smoger who, literally, hooked the arm of Kirkland to prevent a crushing after-the-bell shot.

Ringside physician, Blair Bergen, would check Tapia between rounds and then consult with Smoger. The end was near and nobody would’ve complained too loudly if the bout had been called right there, but Tapia’s trainer, Alex Devia, was fine with pushing forward.

Smoger warned Tapia that if he took anymore “severe headshots,” the fight would be called.

Tapia gave a nod before the beginning of the fifth and did as well as could be expected in the first half of the round, hitting with his last remaining strength and moving with stiff legs, before being once again overwhelmed by the ferocity and physical strength of a hungry Kirkland. By round’s end, Tapia was exhausted, beaten, and eager to sit down in his corner.

HBO’s Max Kellerman remarked, “there’s no quit in Tapia, maybe someone needs to quit for him.”

But that “someone” wasn’t to be found in Tapia’s corner.

As Tapia slumped in his corner, unable or unwilling to even open his eyes, his trainer refused to save his fighter, refused to let his guy retire with dignity.

Bergen and Smoger again came to check on Tapia.

Devia, still braver than brave with his fighter’s life, urged an unresponsive Tapia to push forward, basically shaming his fighter into a fight or die situation.

As the ten second alert sounded for the beginning of the sixth round, Tapia instinctively rose to his feet , dead-legged and expressionless.

When he saw no “hop,” Devia pushed his guy into battle, anyway, and a weary, stone-faced Tapia set out for the sixth round.

The young talent would never make it to the middle of the ring.

Kirkland pounced on Tapia and beat him up along the ropes, unafraid of the lazy arm punches now being thrown by, what literally could’ve been, a dead man walking.

About forty seconds later, Smoger jumped in to save the young fighter, but not before one last left hand, actually thrown around an interjecting Smoger, seemed to remove Tapia completely from his senses.

After the bout, Tapia was reportedly rushed to a nearby trauma center where, fortunately, all brain scans proved to be negative.

But this could’ve been yet another tragic night for the sport. And, make no mistake about it, we’re lucky it wasn’t. Smoger and Bergen may have let things go too long, but what trainer Alex Devia did was absolutely reprehensible.

Devia, who runs the Garden State School of Boxing in Pasaaic, NJ, pushed his fighter–a young, 23-year-old kid– into the jaws of death, for no other apparent reason than ego. By the end of the fourth round, it was quite apparent that this fight was not winnable for Tapia, yet Devia would insist on going forward.

With his kid unresponsive in his corner, spent and bloody and hanging on by sheer strength of character, Devia put Tapia into a position where he’d have to stop his own fight in order to save himself– in front of the HBO cameras, his family, and the small army of fans he brought to the Boardwalk Hall with him. Instead of taking care of his kid, Devia shamed him into fighting on. Tapia would’ve died rather than give, up– and he almost did.

As someone who has taken kids into battle, it’s hard to imagine the mindset of a trainer who would play such games with the life and well-being of his fighter.

Maybe Devia felt the heat of the spotlight and grabbed too eagerly at his chance to be a real big shot in the business. Maybe he felt he was doing what Tapia would’ve wanted. Whatever the case, Devia blew it and showed the world that when push comes to shove, his own drive to succeed is greater than the compassion he has for his fighters.

Boxing almost suffered through another tragedy Saturday night, but thankfully, all that came from this sick exhibition of poor corner work was a glimpse at the type of character boxing doesn’t need.