If you ever took a poll of who some of the biggest flakes in pro sports have been over the past couple of decades, there’s little doubt that former world champion heavyweight boxing villain turned showbiz celebrity Mike Tyson (50-6, 44 KOs) would make the list. Similarly, there’s also few who would question the inclusion of 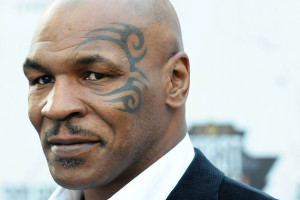 one of the greatest rebounders in NBA history (next to Wilt Chamberlain), Dennis “The Worm” Rodman, who won a plethora of championships with both the Detroit Pistons and the Chicago Bulls.

Yes, there was once the coked-up, crazed Tyson who vowed to “eat the children” of Lennox Lewis, who bit off part of Evander Holyfield’s ear. A far cry from the eager-to-please, self-admitted Prozac-ed version now touring around a Spike Lee-produced version of his bad boy life called “The Undisputed Truth” (though some may disagree with that characterization) around the world now.

And there was Rodman in his prime, sporting multi-colored hair, piercings, and tattoos at a time when almost no-one else in the league sported them (take a look around the NBA now for Rodman’s influence in that area). He dated pop diva of the day Madonna.  Rodman even showed up once to a media event clad in a wedding dress in order to “marry himself.”  You can figure out the symbolism there.

Yes, Tyson and Rodman would seem to be kindred spirits. But as he recently took the time to promote his stage show, the reformed Tyson made it known that “The Worm” had offended him with his recent trip to official USA enemy nation North Korea.

Rodman, you see, gathered together a number of ex-NBA players for a basketball exhibition in the Communist country, and apparently didn’t do enough “rah rah USA” type talking over there to please Iron Mike.

A thorny CNN interview in which Rodman appeared to lose his cool didn’t help matters any.

“They’ll probably arrest him when he gets back in this country,” Tyson fumed.

“When you see [former NBA player] Charles Smith, who you know is a decent person. I could not believe that Charles Smith would be involved with that, unless it was something advantageous for him,” Tyson said.

“But I couldn’t believe, Dennis Rodman, who’s leading the way. Man, it’s such a disappointing factor. It just wasn’t good. And it didn’t help the cause. Look, nobody can stop me from making a fool of myself, but that was some really, some really bad stuff. It wasn’t even funny. It was like, a [fictional] scene. You couldn’t even believe that’s real. If I would have woke up in the middle of that, I would have thought it was a sketch or something.

“It was really some bad stuff, when you look at it. And he put those other guys in a bad predicament too. They may never get a job to work with, to be involved with the NBA again, for life.”

Wow, when Iron Mike thinks you’ve gone way past the line, maybe it really is time for some serious self-reflection. And Tyson leveled the serious charge of treason against the former NBA great.

“Look, I’m not politically incarnate or anything, but when you examine what treason is, it’s treason.  He’s in another land, that’s an enemy of our land, and he’s talking [expletive] on us. He’s talking really bad to our guys over there.”

Yeah, but Iron Mike, politically astute or not, this is a guy who once married himself in a public ceremony. You expected some Henry Kissinger-style diplomacy from Dennis Rodman?

Still, Tyson may have a point. Apparently outgoing NBA chief David Stern was none too pleased with Rodman’s antics either.  It’s probably a good thing Rodman has already been inducted into basketball’s Hall of Fame.

Stern accused Rodman and his posse of performing in North Korea for big money, yet Rodman’s agent says his client accepted no payment from the North Korean government.

Of course, given Tyson’s past–and some might include his present–one could also say this is an instance of the pot calling the kettle a treasonous sell-out.

However, when asked if he might consider taking his one-man show over to North Korea, Tyson was adamant: “You ain’t gotta worry about that.”