It’s hardly a secret that many American fight fans–and maybe American boxing networks as well–can hardly wait to see the reign of the men who have ruled the heavyweight division of boxing (until the arrival of Lennox Lewis, mostly American-ruled territory) come to an end. 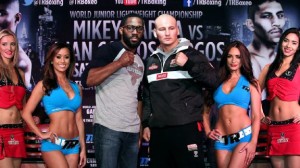 It’s been endlessly debated in this country as to “what is wrong” with the Klitschkos, but like Lewis, they will probably be remembered much more fondly when they’ve been gone for a few years.

Unfortunately for such Klitschko-loathing types, Wladimir doesn’t look to be even close to retirement at 37 years of age, and even 42-year-old WBC “champion emeritus” Vitali has hinted he may yet return for a fight or two (think: David Haye).

At any rate, as American boxing fans look for a Great Savior to reclaim “their” former glamor division, some have fallen short (Seth Mitchell), some are impressive but untested (Deontay Wilder), and some have proven just enough to be taken seriously.

In that last category, we have Bryant “Bye-Bye” Jennings (17-0, 9 KOs), who enters Madison Square Garden tonight with the pressure of being the Next Big American Thing at heavyweight placed squarely on his 29-year-old shoulders.

Jennings’ big victory so far came over former WBO world champion Sergei Liakhovich in 2012; unfortunately, this came after a vicious 2011 battle between pre-injury Robert Helenius and Liakhovich, a fight that has seen both men never quite regain their old form.  So it’s hard to know how much credit Jennings should get for this victory, as Liakhovich was also easily disposed of by Deontay Wilder recently and now appears finished.

On the negative side, Jennings was rattled hard in a 2012 bout by heavyweight journeyman Bowie Tupou, who should have been credited with a knockdown of “Bye-Bye,” who almost lived up to his name in the wrong fashion in that bout before coming back to win.  Jennings also wasn’t particulary impressive against Steve Collins in the same year, with the judges scoring a perhaps unfairly wide unanimous decision for Jennings despite some good body work by his opponent.

Jennings will receive his severest test to date tonight at MSG versus Poland’s colorful Artur “The Pin” Szpilka, who is no stranger to tough battles at the young age of 24.  Szpilka–who has often made his way to the ring dressed in orange prison garb, accompanied by sexy strippers dressed as policewomen (a reference to his stint in jail for soccer hooliganism) and augmented by Polish rappers, is an entertainer, the kind of entertainer that the anti-Klitschko crowd claims they have longed for.

Alas, he’s not an American.

Szpilka has shown toughness while amassing a record of 16-0, 21 KOs.  Names on his resume include Jameel McCline (a fight in which Szpilka suffered a broken jaw, but nevertheless finished the fight), Taras Bidenko, Brian Minto, Mike Mollo (twice), and even upcoming Tyson Fury opponent Gonzolo Omar Basile, who Szpilka knocked out in round four.

Put it this way: Szpilka is battle-tested, far more so than Jennings.  By the end of this this fight, American fight fans will know if Bryant Jennings is indeed their Great Hope for the future, or just another pretender to the throne that has been shared by those pesky Klitschko brothers for so long.