In New York City Wednesday night, UBF super bantamweight champ Heather “The Heat” Hardy (8-0, 2 KO’s) remained undefeated as she did her share to make the final boxing card at The Roseland Ballroom one to remember. Hardy, fighting in her first eight round contest, took a split decision win over game challenger, Christina Fuentes (2-5-3) of Texas. As is usually the case with Hardy, this fight was cited by many as the best of the night, and even one of the best fights Broadway Boxing has produced. The two slugged it out for eig 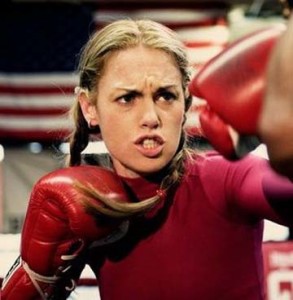 ht non-stop rounds, each taking the others best punches and returning fire without taking a step backwards. In a post-fight interview with Hit First Boxing (via YouTube) Hardy said of her opponent, “she was really tough, usually girls that I hit like that don’t keep coming, but she just kept coming.” Scores of the contest were 77-75 across the board, two judges in favor of Hardy, one in favor of Fuentes.

Sabrina Ostowari (8-0, 1 KO) and Arlene Blencowe (2-2) spent Valentine’s Day fighting for the vacant Australia female lightweight title. Ostowari was dropped in the fourth frame, but managed to eke out a unanimous decision with scores of 76-75 (twice) and 77-74 to win the belt; she’s also held the Australia – Queensland State super featherweight title. Blencowe holds both the WIBA and WBF lightweight titles which she won in her third pro contest last June.

On a “Nordic Fight Night” card headlined by the Nielsen brothers, undefeated Klara Svensson (13-0, 5 KO’s) made quick work of Veronika Hornyak (4-3, 1 KO), stopping her in the opening round. Hornyak has now lost three of the last four bouts, including contests for the WBC Youth and WIBA lightweight titles. Svensson has held light welterweight titles for the WIBF and WBF (Intercontinental), and is the current WBC Silver light welterweight title holder, though she hasn’t been involved in a title bout in a year’s time despite fighting on six occasions since winning the belt.

Coming up Saturday night in Mexico, Mariana Juarez (38-7-63, 16 KO’s) makes the second defense of the WBC International super flyweight title against California’s Melissa McMorrow (9-3-3, 1 KO). Juarez was a long reigning WBC flyweight titlist, holding the title since 2009 and having success in 15 world title contests before losing to Ava Knight in 2012. She’s since went 3-1. McMorrow is the former WBO and WIBF flyweight champion: she holds victories over top flyweights Susi Kentikian and Nadia Raoui.