When Julio Cesar Chavez Jr (47-1-1, 32 koes) meets Bryan Vera (23-7, 14 koes) for the second time this Saturday, he will be looking to put behind him the controversy of their first meeting, last September, when he and the three judges seemed to be just about the only people present at the Stubhub Centre that night, who believed that 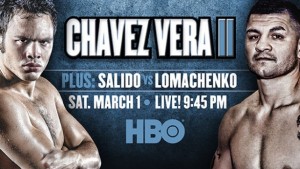 Chavez deserved to take the decision. To say that the verdict left a nasty smell in the air would be an understatement.

Brian Vera was supposed to be a soft fight for Chavez Jr.; a simple warm up to shed some rust and look impressive in what was his first fight since losing to Sergio Martinez for the WBC World middleweight title in 2012.  However, things didn’t turn out that way. Far from being a soft target, Vera turned out to be a feisty opponent who took full advantage of an out of shape Chavez Jr. This was after the fight had gone from being a super-middleweight contest, to being a ’catchweight’ fight at 173 pounds, (just two pounds under the light-heavyweight limit) after it became clear that Chavez Jr. would not be able to make the super-middleweight limit.

The results of Chavez’s lack of conditioning were plain for all to see against Vera.  Despite being a heavy underdog going into the fight, Vera out-hustled, out-boxed, and even out-slugged Junior.  Although Chavez Jr. seemed to land the heavier punches, they were few and far between, and when they did find their target, Vera simply shook them off and increased his own attack. Vera is not a big puncher, but he controlled the pace of the fight, and landed considerably more punches throughout the course of the contest. In addition to this, Vera was also the aggressor, while Chavez Jr. spent large portions of the fight on the retreat and covering up, while at the same time, offering little to counter Vera’s constant busyness.

If the verdict in favour of Chavez Jr. came as a shock to observers, it shouldn’t have, after all, Chavez Jr.’s boxing career has been marked by the blatant favouritism and indulgence that he has received from the boxing authorities and the WBC in particular. Being the son of the legendary multi-weight world champion, Julio Cesar Chavez Sr., has certainly turned out to have some perks for Junior, with the biggest perk of all is when the president of the WBC doubles as your Godfather. As can be expected under such circumstances, the late Jose Sulaiman was the perfect Godfather for Chavez Jr. The way Sergio Martinez’s WBC world middleweight title was levered from him during an injury-forced absence in 2011, and handed to Sulaiman’s favourite (God) son, was really something to behold, for its pure unashamed crassness.

For his part, Chavez Jr., having been born with a silver (or is it golden?) boxing glove in his mouth, rather than a silver spoon, has spent the best part of his career bewailing how tough life is when you’re the son of a legendary champion.

Chavez’s tragedy is that he has inherited little of his famous father’s pugilistic gifts. Instead, he has built his career upon a wide variety of mediocre opposition, allied to an astonishing ability to downsize for weigh-in day, and then gain as much as 25 pounds by fight time. This difference in natural size from his opponents is the one thing, which has helped Chavez look like a genuine world-class fighter in the past, and has helped him compensate for his lack of talent in almost every other area.  It is true, that young Chavez is a tough boy, who can take a rap on the chin and keep coming forward, as he did in his fight with Martinez. Then again, when a fighter is well over 14lbs+ heavier than the man in front of you, it must be a little easier to take what they dish out.

It is perhaps fitting, in the topsy-turvy world of Chavez Jr., that his most admirable night in many ways has been his defeat at the hands of Sergio Martinez. On that night, Chavez Jr. showed genuine heart to take a prolonged boxing lesson and pasting from Martinez, and then stage a last round rally that had some believing he was about to pull off a famous victory. In the end, it was not enough and Chavez Jr. lost by a wide margin, but he had shown a toughness and heart that many thought he did not possess.  It was a defeat, but not a disgrace.

Ironically, after the positives that came out of his loss to Martinez, Chavez Jr. has seen his fortunes fall and his career tumble completely off the rails. In the wake of his first career defeat, Chavez Jr. was hit by a suspension for testing positive for marijuana in his post Martinez drugs test, forcing him into a year of inactivity, and recrimination with those around him.  Then came the ’comeback’ last September, and the controversy with Vera.

It wasn’t supposed to be like this for Junior. The Vera fight was supposed to be a prelude to Chavez Jr. ascending to a new throne at super-middleweight, (Middleweight being written off now, due to Jr’s ever expanding midriff) the WBC portion of which had been skilfully prised from an injured and inactive Andre Ward (rings a bell somehow?) and given on loan to battle worn veteran Sakio Bika.  Everything was set up for a Chavez Jr. to challenge Bika once he got past Vera, but Junior fluffed his lines, even if the judges tried to give him a pass anyway.

Controversial decisions are nothing new for Chavez Jr. Previous opponents Matt Vanda, Sebastian Zbik, and Marco Antonio Rubio have all suffered from the curious judging that often seems to accompany a Julio Cesar Chavez Jr. fight. Maybe it is one of the few traits that he has inherited from his father, as Pernell Whitaker and Frankie Randall know only too well. It has never been that easy to get a point’s decision over a Chavez.

The general indignation caused by the Vera decision couldn’t be simply ignored this time, even the Chavez Jr’s loyal Mexican fan base have grown increasingly disillusioned with their wayward hero. In the run up to this rematch, Chavez Jr. has been making all the right noises, saying that he owes the fans a great performance and that he has been training for 5 months, and certainly pictures seem to show Chavez Jr. in better condition than he has been in years.

Chavez needs to do more than simply win this fight, he needs to win it in style in order to be convincing. Vera for all his toughness is in reality a middleweight, and with all due respect, a mediocre middleweight. Chavez is likely to be weighing in at cruiserweight levels by fight time. With such a natural size advantage, anything less than a clear-cut victory for Chavez Jr. on Saturday, will be a further blow to his crumbled credibility. For Vera, the question is can he really improve on his last performance against Chavez Jr. and how will he stand up to a supposedly fit and motivated Chavez Jr.

One thing in Vera’s favour is that out of the two men, it is he, rather than Chavez Jr. who is the natural fighter, with an indomitable heart. Whether it will be enough to defeat a fit Chavez Jr is an interesting question.

Saturday should be redemption for Chavez Jr., otherwise, his credibility will be stretched to breaking point, and there’s a limit to how much even his homegrown   Mexican support will put up with, before they start to finally desert him.

If the fight goes the distance again, it is hoped that the judges are watching the same fight as everyone else this time.