Tomasz Adamek (49-2, 29 KOs) continues his march towards another title shot when he takes on rising heavyweight Vyacheslav Glazkov (16-0-1, 11 KOs), Saturday night at the Sands Casino in Bethlehem, Pennsylvania. The Main Events promoted show will air on the NBC Sports Network, where Adamek has been a mainstay ever since the 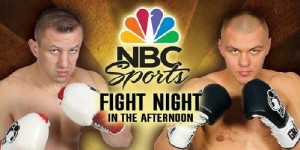 Since his loss to then heavyweight champion Vitali Klitschko in 2011, Adamek has won five consecutive fights over the likes of Eddie Chambers and Steve Cunningham. The elder Klitschko brother has since left the sport and, as a result, has vacated his WBC title. At 37, Adamek isn’t getting any younger and a win over Glaskov could put him in a position to vie for that belt, or any of the titles currently being held by Wladimir Klitschko.

Although Glaskov isn’t as accomplished as Adamek; he’s eight years younger and has yet to be defeated. The Ukrainian’s toughest challenge to date came against Malik Scott in a fight that was ruled a draw. The 2008 Bronze medalist will attempt to become only the third person in 50 fights to defeat Adamek, who’s a former light heavyweight and cruiserweight champion.

These two were on a crash course to meet this past November, but Adamek had to pull out after he unexpectedly fell ill the week of the bout. Instead, Glaskov fought late replacement Garrett Wilson, whom he defeated by unanimous decision.

This bout has the feel of a “pass the torch” type of a match-up; but in front of what’s sure to be a pro Adamek crowd, don’t look for the Polish star to yield to the upstart Glazkov.