At the age of 41, US heavyweight veteran Tony Thompson had a resurgent year in 2013, making the trip to Liverpool, the back yard of 6′ 9″ heavyweight giant David Price twice to stop the man many had already anointed as the successor to the world champion Klitschko brothers, at least in the UK. 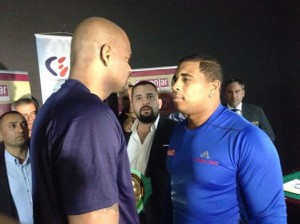 Thompson then decided to make a move designed to get him a third try at world champion Wladimir Klitschko, holder of all the belts minus the WBC strap, which his brother Vitali recently vacated.

The veteran gave it a good try in Germany against a close-to-prime Bulgarian heavyweight named Kubrat Pulev, who, with Vitali retired, may be the best heavyweight in the world not named Klitschko. He lost a unanimous decision, but it took Pulev awhile to decipher Thompson’s left-handed style and Thompson certainly didn’t embarrass himself in the loss, having a few good moments of his own.

2013 seemed to whet “Tony the Tiger’s” appetite for more pugilism, and why not? Having gotten a late start to his career, Thompson has not been through many wars, and still seems to have enough left in the tank for some more big fights.

His first opponent for 2014, Odlanier “La Sombra” Solis, has been an enigma in the heavyweight division for some time now.

Solis turned pro in 2007 after defeating none other than David Haye in the Olympics, and since that time has had an ardent group of supporters proclaiming his greatness.

Yet in 2014, it’s fair to say that Solis has pretty much miserably failed to live up to the hype.

In 2011, Solis got a shot–many felt an undeserved shot–at the Vitali’s WBC championship after years of carrying around far too much weight, ballooning up to 260 pounds (on a 6′ 1″ frame) for an important eliminator against a shot Ray Austin.  That fight ended in a disqualification of Austin in a fight where both men seemed to be staggering around the ring most of the night.

Solis got down to 247 for the title fight, but walking around at close to 300 pounds much of the time took its toll: after a decent first two-thirds of the first round, Vitali caught Solis on the temple, staggering him enough that the boxer’s right knee gave way. That was it: the fight was called off, Klitschko given a TKO win.

Since he lost to Klitschko, Solis, who has said he really doesn’t think much of the sport of boxing or care about it, was supposed to get serious, but on his first comeback fight against Germany’s Konstantin Airich, weighed 267 1/2, pounds, the second highest number of his career.

A sleepwalking Solis defeated Airich in a fight which even his hyperbolic manager, Ahmet Oner (who Solis has tried but failed to leave) couldn’t defend, and has only fought twice in recent years, with wins over Leif Larsen by UD and over Yakup Saglam by TKO, Solis weighing around 255 in both bouts.

Neither fight really set the boxing world alight with cries of, “Solis is back!”

Still, Solis still has a fan club, albeit a smaller one as the years go by.

Based on recent peformances, it would seem to this writer that Thompson has the psychological edge for this meeting in the exotic setting of Istanbul, Turkey.

Both men weighed in almost exactly as they did for their previous fights: Thompson was 264.5 while Solis was at 255.7.