I’ve long asserted that any real businessman, if he chose to get his hands dirty in the world of boxing, would easily own the sport in a relatively short period of time.

The boxing business is a creature of habit– a short-sighted, spiteful, unnecessarily sleazy habit. Like a two-bit thug who makes a hundred bucks a week via grift when he could make two hundred flipping burgers, boxing hustles like a pimp because that’s all it knows. 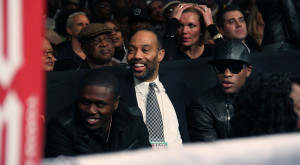 But what would happen if a real businessman came into boxing and began to make sound, long-sighted business decisions while simultaneously exploiting the sport’s loophole-heavy regulatory mess?

The answer to that question is Al Haymon.

Haymon is the Harvard-educated concert promoter/TV producer that has the boxing establishment on the ropes. When the media is not outright attacking him, they’re tracking his acquisitions and movements like nervous TV meteorologists tracking a tornado’s path. Haymon has brought fear into the tight-knit boxing community because he’s an outsider without loyalty to any of the sport’s other power brokers and is, apparently, not the least bit interested in playing the game the old school way.

Early on in Haymon’s foray into boxing, back when his stable consisted solely of Vernon Forrest, he recognized the ease with which he could move in and dominate the anything-goes Wild West world of boxing.

“If I wanted to, I could run boxing,” Haymon reportedly told Xavier James, then-vice president for sports programming at HBO.

Not too many years later, it appears that Haymon may be on the road to making his bold declaration a reality.

And because boxing is what it is, Haymon’s been able to use the sport’s lawlessness against those who have historically used that same lawlessness to their advantage. As a man who can talk business with numbers-oriented network stiffs as well as communicate at the common man level of the fighter, Haymon is a master at getting what he wants from both sides of the boxing business.

Officially regarded as an adviser, Haymon acts the part of promoter and manager, while avoiding the liabilities and responsibilities associated with either. His role as a legally “off the books” player allows him to approach anyone he likes, regardless of whether they already have a promotional/managerial deal, and immediately seize control.

With no centralized authority in the sport, these things are possible. Even the seldom-enforced Muhammad Ali Reform Act is virtually useless against such power grabs. Frankly, it’s amazing it took so long for someone to realize the ease with which one could consolidate power in a sport without a vetting system and with absolutely no desire to self-regulate.

In a few years and with the right moves, Haymon could very well own most of the entire sport.

A quick look at Haymon’s past may be the key to knowing his future.

He first became an entertainment industry powerhouse by attaching himself to major names and using that influence to acquire a tremendous pool of talent. He then went about consolidating his talent roster and slowly, but surely eliminating all the middlemen between the artist and the consumer. At the height of Haymon’s music management career, he controlled the artists and his company handled everything else, from marketing right down to the actual stage lighting. Haymon’s company became a self-contained money-making machine that effectively steamrolled all competition in the R&B/Rap tour industry while working with stars such as MC Hammer, New Edition, Whitney Houston and Mary J. Blige.

In boxing, Haymon has the potential to have even more control, more ownership, and take in a greater share of the money than in the music industry.

But while most of the current boxing power structure looks on with fear, sending their media lapdogs to attack Haymon for his power play, one has to wonder whether the sport wouldn’t be better off if Haymon’s hustle helped remove some of these lifelong scam artists from their boxing gigs.

The boxing business needs a major change in the way it delivers product to its audience, but the dinosaurs in power have historically been slow to move and more then willing to shovel pennies into their pocket at the expense of dollars left on the table. Boxing needs promoters who care to promote and a business model that’s more dynamic and less carny.

Haymon, like it or not, can bring the boxing world to the modern world.

Golden Boy’s recent Canelo Alvarez-Alfredo Angulo pay-per-view, which featured a couple of prominent Haymon fighters, may have given fans a glimpse into the future of boxing.

With a small base payroll, fortified by tremendous back-end possibilities, Golden Boy limited their liabilities and allowed for unlimited earning possibilities for its star, the 23-year-old “Canelo” Alvarez.

After taking into consideration the relatively low fighter payroll for this card (about $3 million) and the $2,084,700 live gate, Golden Boy only had to sell about 40,000 PPVs to break even after all expenses (and this is not even considering foreign market rights, sponsorships, merchandise, etc). Anything over 40K was pure profit– 80% of which, per contractual agreement, went to Alvarez.

Alvarez-Angulo would generate more than 350,000 buys and bring Alvarez a payday likely to approach $8 million when all numbers are finally tallied, all for a relatively pedestrian and ultimately one-sided victory.

If one chooses to crunch the numbers, the same low-risk/high-reward PPV model could be applied to other fights, from superstar clashes to Boxing After Dark-level bouts

The secret to boxing’s future may be in taking the fights straight to the public, without the traditional promoter system and without a network sponsor. In boxing as in the military, the new model should be quick and efficient rather than large and old.

It may seem counter-intuitive to say that an all-pay business model is better for the consumer. After all, they’d be paying for something they previously got for “free.” But an all-pay system would remove most of the bloat from the current boxing structure, cut though politics, and ensure that fights being made are, first and foremost, fights that fans would pay to see. It would place an emphasis back on matchmaking and on attracting a large, enthusiastic live gate, a significant fan-building tool all but lost in the days of guaranteed HBO and Showtime money.

A $9.95 monthly two or three-fight pay-per-view, delivered straight to the consumer’s TV, computer, tablet, or smart phone, could become a regular thing under the right management. Fans would have access to more fights for about half the price of their current premium channel subscription and the boxers would earn more money from lower base, incentive-heavy deals.

We know that most of the movers and shakers in the boxing would be reluctant to turn their back on guaranteed money and have shown themselves to be slow in embracing new technology. We also know that Al Haymon’s business specialty has been in attracting talent, removing middlemen, and delivering that talent directly to the consumer.

Rumors of tensions within Golden Boy Promotions between Oscar De la Hoya and Richard Schaefer may be facilitating a step forward from Haymon, who has recently gone on a signing spree of mid-card-level fighters.

Could we eventually see Haymon, riding alongside Schaefer and Floyd Mayweather,  make the big move from guiding force to boxing emperor?

Even without Schaefer, we could very well be seeing the beginning of an unprecedented power grab in the sport.

Debate will rage on about whether Boxing-under-Haymon would be a good thing or not, but there’s not a whole lot anyone can do about it should he decide to build his throne and sit on it.