DC Armory, Washington, DC– Bernard Hopkins (55-6-2, 32 KOs) did it again. The ageless wonder, fighting in his thirty-third world title fight and defending his IBF 175 lb. title for the second time, managed to school yet another high end light heavyweight with a split decision (that should’ve been a unanimous decision) over WBA titlist Beibut Shumenov 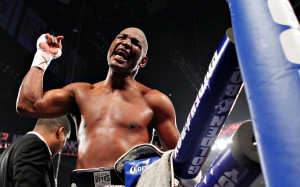 (14-2, 9 KOs) . The final tally saw two scores of 116-111 for Hopkins against an absolutely putrid 114-113 call for Shumenov, issued by Panama’s Gustavo Padilla. The Boxing Tribune felt that the bout was significantly more one-sided than the official scores indicated, seeing the fight as a 119-108 romp in favor of the 49-year-old future Hall of Famer.

After a close first round where neither was pressing any action, Hopkins found his rhythm and pace in the second and, from there, just began widening the gap as the fight wore on.

By the middle rounds, the 30-year-old native of Kazakhstan was practically being led around the ring on a leash by Hopkins and had resorted to the occasional desperate roundhouse as his sole offense.

Meanwhile, Hopkins grew bolder with his own offense, stepping into some solid shots late in the fight and even knocking Shumenov down in the eleventh with a jaw-rattling sharp right hand.

At the end of the evening, unifying the IBF and WBA titles was yet another accomplishment in an already storied career that seems to be far from over.

After the win, a philosophical Hopkins credited his own solid fundamentals as the reason for his longevity and called on yet another unification bout, this time against WBC champ, Adonis Stevenson.

After a fairly even first round, Porter rocked Malignaggi in the second round, causing major damage with a rocket-like lead left hand and a heavy overhand right that immediately forced the veteran into survival mode for the rest of the fight.

The bludgeoning continued into the fourth round, when Porter dropped Malignaggi for the first time in the bout and then followed it up with a relentless attack that nearly forced the Brooklyn native through the ring ropes.

Konecny, in his third failed bid for a world title, bulled forward and came at Quillin, but lacked the physical tools and offensive creativity to do much of anything against the defending titlist.

“Kid Chocolate” did not look like an elite-level middleweight against Konecny, but he did enough to win the fight and, therefore, keep his name in the mix at 160 lbs. with the likes of Sergio Martinez and Gennady Golovkin.