On the surface and through the eyes of a jaded “boxing guy,” Oscar De la Hoya’s new, post-rehab “let’s be friends” attitude is an invitation to a dagger in the back and a push down a flight of stairs.

Since completing his rehab, the former six-division world champ and current President of Golden Boy Promotions has been all over the place, shooting off rays of sunshine and planting seeds of friendship next to the weeds of boxing discontent. He even went to make good with former promoter and one-time bitter rival, Bob Arum (with reports varying as to whether Arum’s small heart grew three sizes that day).

And while Oscar’s Up with People euphoria is a little odd in the midst of a boxing Cold War, he’s not wrong. 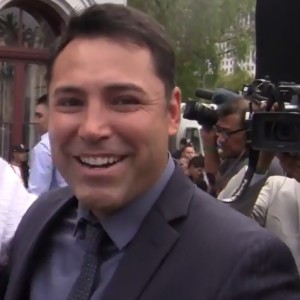 As I’ve said countless times over the years, a boxing that runs itself like a real sport will move out of the niche category and closer to the mainstream. People want to believe in the sport, they want to be drawn in.

The truth is that no other sport can deliver as much concentrated excitement and drama as boxing. And it doesn’t require any real, deep understanding of plays or strategies or a volume of related stats. A fight is a fight and even the most uninitiated of observers can appreciate a man-to-man (or woman-to-woman) struggle. It’s a sport that is supremely complicated for the participant, but easy to appreciated for the viewer.

Boxing is a part of our national heritage and identity. No other sport inspires as much art, no other sport has contributed as much to our language and culture.

People want to believe in boxing.

Where Oscar may be off the deep end is in assuming that his rays of sunlight can turn the hustlers and con men of boxing, who make up a great portion of the sport’s infrastructure, into reasonable businessmen.

Oscar may want everyone to win, but to the boxing power broker, that statement, alone, is tantamount to a declaration of defeat. Yeah, because while the Golden Boy is reaching over the fence, you can be damn sure that the other guy is securing his own best interest and finding a way to flip Oscar’s optimism into a major score for himself.

It’s, really, the nature of the business and of those who have been running it since the very beginning. You’d have more luck turning the Gambinos into the Osmands.

Aside from the dinosaurs of the sport, boxing’s current business structure is the ultimate killer of that ODH Kumbaya moment. With specific fighters signed to specific networks, a Cold War, us vs. them mentality is almost a necessity. Does anyone foresee an HBO-Showtime co-promotion that is to both network’s benefit?

Love of the sport notwithstanding, a cooperative attitude is not in the best interest of either side’s bottom line. Even as boxing celebrated its return to prime time “regular” ESPN on Saturday with an entertaining Bermane Stiverne-Chris Arreola clash, Showtime was upstaging the moment by airing a replay of last week’s Floyd Mayweather pay-per-view.

So, while Oscar’s heart is in the right place, it’s tough to plant red roses in a barren desert.

I know from experience that going head to head with the status quo in boxing is about as inspirational and productive as running face-first into a brick wall.

Boxing is full of guys, at all levels, who will fight change and reform at every turn and with every bit of energy in their body. They’ll fight it because they know that, most likely, a boxing run like a real sport would have no use for them.

Likewise, the boxing media, which one would assume is a lot more likely to be full of creative and fair-minded individuals (or at least partially full of such people), is nearly as resistant to change as the guys actually making all the big money on the business end. Their answer to most issues is to do nothing. And those few moved to action are bogged down by conflicts of interest and by a chronic lack of vision, stubborn arrogance, and/or inability to work “outside the box.”

But hope is not lost.

As long as there are fighters willing to fight and fans willing to watch, there’s always hope for the sport to inch back closer to the mainstream. But we ain’t getting there by throwing lilacs and rainbow pillows at gangsters.

Simply put the con men, dinosaurs, and carpetbaggers need to be exposed, de-powered, and pushed out of the way. And this is only done on the backs of brave writers with real voices and smart businessmen with a clear vision. From there, it’s up to the fans to pull themselves out of their malaise and actively support positive changes.

Sure, there are lots of “ifs” in this optimistic vision for tomorrow and some things may not go according to plan. But this much is for sure– Nothing will get accomplished if the same crooks, creeps, and useful idiots stay in power.