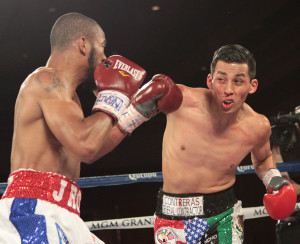 Springs Casino, Indio, California, USA
In the headlining bout of a Golden Boy Promotions card, undefeated light middleweights meet sin a scheduled 10 round contest. In his lone title opportunity, Centeno had to settle for a four round no contest against Julian Williams in a bout for the vacant WBC International light middleweight title due to an accidental head butt. This is Ibarra’s first 10 round bout.

6/7 – David Price (17-2, 15 KO’s) vs. Yaroslav Zavorotnyi (16-6, 14 KO’s) – Sport and Congress Center, Schwerin, Mecklenburg-Vorpommern, Germany
Price continues the rebuilding stage, looking for his third straight win against Zavorotnyi, who is also on a two fight winning streak after losing back to back bouts like Price.

6/7 – Steve Forbes (35-12, 11 KO’s) vs. Emmanuel Lartei Lartey (15-2-1, 7 KO’s) – Emerald Queen Casino, Tacoma, Washington, USA
A former IBF super featherweight champ in 200-2001, Forbes, a former “Contender” contestant is looking for a win after dropping his last four bouts and only winning three fights since 2006. Lartey’s two defeats came back to back in his last two outings, both against undefeated prospects.