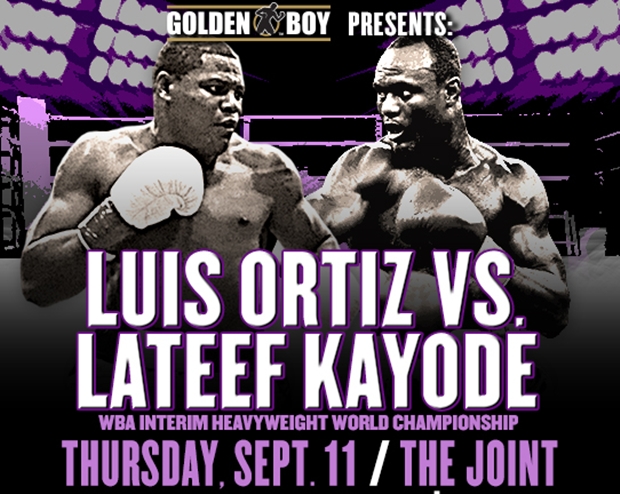 Golden Boy Promotions has decided to empty out their bench for this coming Thursday’s Fox Sports 1 show at the Hard Rock Hotel and Casino in Las Vegas, Nevada, creating what they hope to be a high profile cable card that leads into Saturday’s Mayweather-Maidana pay-per-view event. The well-stocked card is chock full of recognizable names, but, unless something shocking happens, will likely have only two compelling match-ups. Here’s a brief rundown of the good and bad of the September 11 card:

For the silly WBA interim heavyweight title, this one would appear to be evenly-matched, despite Kayode coming into the bout as a converted cruiserweight. Expect one of two things with this one– A solid heavyweight bout between evenly-match second tier heavyweights or a slow-paced stinker between two awkward fighters likely to gas early.

Argentina’s Cuellar and Puerto Rico’s Lopez can both punch and both are vulnerable to a punch– especially the war-battered Lopez. “Juanma” is dangerously close to being “punchy” and each moment in the ring brings the risk of him suffering a spectacular knockout. But he’s also a heavy-handed slugger with a warrior’s instinct. So, it’s always do or die for the former featherweight world champ. For what it’s worth, Cuellar-Lopez is for the WBA interim featherweight title.

The “more exciting” of the Charlo twins is on the verge of a breakthrough and fans will soon see whether he’s a true world class fighter or simply a very talented second tier prospect. Not much, however, will be learned from this junior middleweight bout with a  33-year-old Mexican journeyman. Gonzalez has never been stopped before, so there’s always the intrigue of seeing if Charlo can be the first to do the job.

Tough, fan-friendly Josesito Lopez is being fattened up to be fed to another Golden Boy fighter at some point in the future, quite possibly Amir Khan this winter. The 30-year-old from Riverside, California has been handled relatively gently since his string of wars with the likes of Victor Ortiz, Saul Alvarez, and Marcos Maidana. Thursday’s opponent is as close to a guaranteed highlight reel win as possible at this stage of the game. The light-hitting Mexican club fighter, Cobos’ last three opponents had a combined ring record of 8-35-3.