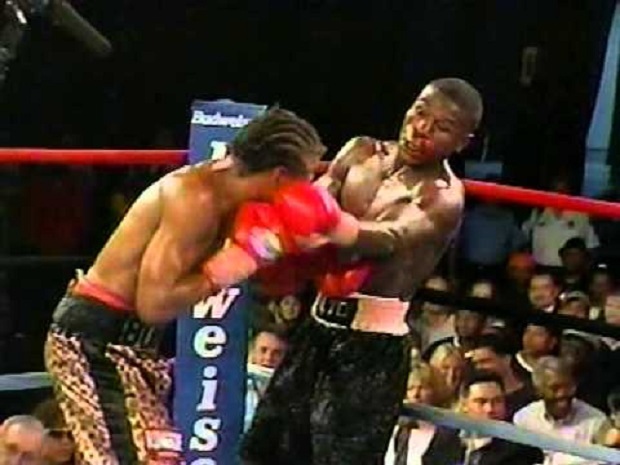 Back in 2000, the lightweight version of Floyd Mayweather had just turned down a sizable seven fight HBO contract in a bid to parlay his winning into a much bigger payday. In what was the first bout of a three fight deal, Mayweather met with Emanuel Augustus (then Emanuel Burton) at the Cobo Hall in Detroit, Michigan.

Emanuel Augustus’ excellent head movement and defense saw him through several of Mayweather’s blistering flurries early on. Although Augustus welcomed the precise shots he was encountering, his face soon began to bleed and break down.

The Illinois fighter was increasingly absorbing dozens of sharp mayweather punches to both the head and body, but now began to land some unexpected bombs on the (former) “Pretty Boy”.

Augustus’ tenacity began to poke cracks into Floyd Mayweather’s otherwise perfect game, giving him pause when his timing allowed for a sharp counter of his own. Midway through the action, Mayweather himself was bleeding from the nose and mouth due to the constant swarm of activity, but he began to rally consistently after being hurt. To his credit, Floyd Mayweather chose to mostly stand in close and trade punches in the center of the ring.

By the time the fight was 3/4 of the way through, Floyd Mayweather regained control and really started hurting his opponent – his accuracy was wedging a gap too large to come back from. In the ninth round, a re-energized Mayweather unleashed an unbelievable series of left hooks and Emanuel Augustus’ corner threw in the towel.