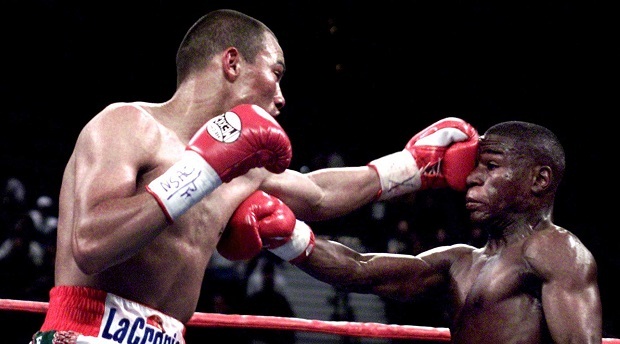 Moving up from the junior lightweight ranks, Floyd Mayweather took on iron-jawed Mexican, Jose Luis Castillo, for Castillo’s WBC lightweight title. At the time, he was the strongest opponent Mayweather had faced and had a world of experience in the trenches. Castillo enjoyed a nine pound weight advantage over his challenger on fight night, but early in the match Mayweather’s raw speed and reflexes were winning him nearly every exchange.

In what could be described as a messy fight, Castillo continued to press the attack, often walking through incoming punches in order to get into range. Then, somewhere during the middle of the fight, Mayweather apparently injured his left shoulder, causing him to switch between southpaw and orthodox stances in an apparent attempt to adjust to the pain. The champion showed no compassion, however and began to use his head on the inside and roughhouse the (unbeknownst to him at the time) injured fighter.

As Mayweather’s output dropped, Castillo gained momentum both with the punches he was landing and the subtle fouls he was now employing. Down the stretch, the more meaningful work was coming from the Mexican and Floyd Mayweather simply wasn’t active enough.

At the end of the day, Jose Luis Castillo out-landed Mayweather by nearly 50 punches, but wasn’t awarded the decision. The controversial call by the judges to award the fight to Floyd Mayweather created an outcry and an immediate rematch was scheduled– a rematch which Mayweather won decisively.