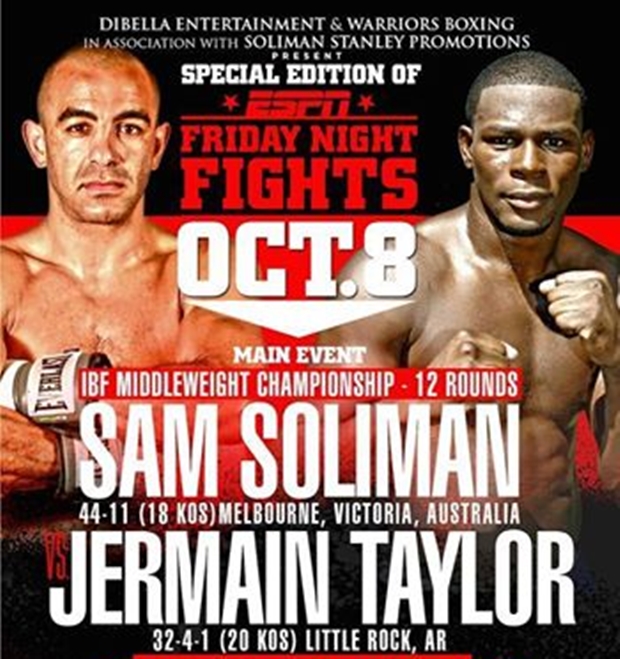 Being pragmatic about it, Jermain Taylor (32-4-1, 20 KOs) getting a world title shot is not completely outrageous. With four recognized world champs at middleweight and an average of two defenses per belt, per year, it was just a matter of time before one of the belt holders would think about cashing in on Taylor’s name recognition as the last recognized four-belt champ.

The hard part to swallow is that the idea went beyond a silly, passing thought to a etched-in-stone plan with the full support of basic cable giant ESPN.

Aside from suffering through a chilling KO streak and, ultimately, bleeding on the brain that led to a two-year retirement from 2009-2011, the former middleweight champ from Arkansas has begun to show signs of erratic behavior in his personal life (like allegedly shooting his cousin less than six weeks ago, with a court date still pending). The 36-year-old Taylor is also now sporting a solemn, stone-faced visage, so customary of a fighter who has suffered too much damage to the head.

Most recently, a short video leaked through social media showed Taylor engaged in some disturbing and odd behavior. During the video clip, Taylor is shown making a racist statement, singing country music, shooting off guns, and closing out the whole thing with a dead-eyed look into the camera and a “Fuck You, God Bless You.”

A friend with knowledge regarding brain-related injuries and conditions said upon looking at the video that Taylor seems to be showing signs of TBI (Traumatic Brain Injury). And while this is by no means a binding diagnosis of any kind, it goes to show that even the semi-casual observer notices that something is not quite right about Taylor.

However, Team Taylor has a ream of paperwork supporting his good health and even, reportedly, a clean bill of health from the Mayo Clinic. To this day, the clinical evidence is still divided as to whether one who once suffered a subdural hematoma (bleeding on the brain) is generally more susceptible to the same issue in the future. Respected ringside physician Dr. Margaret Goodman and Dr. John Stiller, Chief Physician & Neurologist of the Maryland State Athletic Commission, are of the firm belief that a fighter with any sort of history of bleeding on the brain should not be allowed in the ring again.

One would think to err on the side of safety in such matters, but this is boxing, of course, so the show goes on and Taylor’s planned run at a middleweight belt this Wednesday on ESPN2 will continue as planned.

Visiting IBF world champion, Australia’s Sam Soliman (44-11, 18 KOs) will unfortunately get caught up in this mess, guilty only of going along with his team’s too-good job of finding a big name soft touch for a first defense.

The 40-year-old Soliman finally came across world title gold this past May against middleweight mainstay, Felix Sturm via decisive unanimous decision.

An unlikely world titlist, Soliman is an awkward fighter, seventeen years into the game, who wins his bouts on activity and grit, even at this stage of his career. With only eighteen knockouts in forty-four pro bouts, it’s hard to imagine even a greatly diminished Taylor being leveled early or with one punch.

For those concerned about Taylor’s safety, it probably would’ve been better for the former titlist if Soliman were a one-punch KO machine , who could end things in the first ninety seconds of the fight. As it is, though, Taylor will likely receive many mid-level blows to the head over the course of twelve tough rounds– pretty much the worst possible option if trying avoid a future case of bleeding on the brain.

Aside from the health concerns, though, the scariest part of this match-up is that Taylor actually has a fairly solid chance at pulling off the upset. Soliman has never been considered much more than a high-end journeyman or fringe contender up until his unlikely victory over Sturm. Taylor could conceivably walk away with a world title Wednesday evening and then we’d see him in considerably more danger as defending titlist.

Hassan N’Dam, who schooled Curtis Stevens last Wednesday, also on ESPN2, is next in line for a crack at the IBF belt. After him is legitimate pressure-fighting bruiser, Martin Murray. Both bouts with N’Dam and Murray are style nightmares for Taylor, with the latter fight leading to an almost guaranteed early entry into a nursing facility.

Win or lose, it will also be interesting to see whether Taylor continues to engage in increasingly erratic behavior, indicating the possibility of having sustained brain trauma.

Admittedly, this is a fight preview like no other and it really is a shame that a middleweight title bout has to take place with such a bizarre subtext playing out underneath the actual fight. A million reasons could’ve been found to call this one off, but the organizers needed a “Down South” Taylor to sell some seats at the Beau Rivage in Biloxi, Mississippi and ESPN needed the name recognition of Jermain Taylor to sell advertising time for their “special” telecast.

So, it’s Soliman-Taylor on Wednesday night, no matter what any of us say.

Some will root for Soliman, some for Taylor. A good portion of us, though, will simply be hoping that nothing truly unsettling happens.