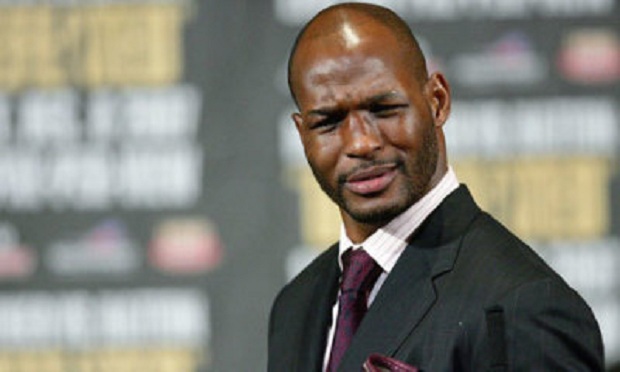 Some say true grit is found in those who push against the flow, who chart their own course and refuse to fall in line. Bernard Hopkins, longtime middleweight champion and current two-belt light heavyweight champion, is no stranger to speaking what is on his mind regardless of the backlash that will follow as a result.

And the ageless wonder is back at it again.

In a recent interview with ESPN, Hopkins told Brian Campbell he believes his race is the reason his historic feats aren’t a bigger deal in mainstream sports.

[It’s] because I’m black. What do you think if my name was Augustine, Herzenstein, Stern? Cappello? Marciano?

If I was any of those names of any other background, I’d be on every billboard and every milk carton and every place to be. If we’re talking ‘American Dream,’ here’s a guy who almost threw his life away and he took this great country’s great attributes and used it — do for self, work hard and be a law-abiding citizen. I’ve done that for 26 years.

Hopkins later touched on his 2008 fight with Kelly Pavlik, in which Hopkins came in as the 6-to-1 underdog but dominated the fight.

That was the greatest moment of my life because it was undeniably white against black. The American story against the thug, even though he changed his life. The convicted felon. So it was me representing an entity that had changed in spite of what they say you should be able to do. But once you do it, they really don’t want you to do it.

And so I exposed it and I beat him easily after being a 6-to-1 underdog. And, matter of fact, it even went further. I ruined his life. I ruined his career.

Hopkins is no stranger to making controversial statements about race. He once criticized former NFL quarterback Donovan McNabb for not being “black enough.” He proudly proclaimed he would “never lose to another white boy” in the days leading up to his 2008 fight with Joe Calzaghe.

Is Bernard Hopkins on to something, or is this just a case of sour grapes? Could boxing’s structure be so racist at its core, so ingrained in the fibers of its being that it’s no longer seen, and even accepted as the modus operandi?

To answer this question, one must put on his (or her) thinking cap. We must examine the groups who choose to take up boxing as a career, those who promote, manage, advise, and exploit the fighters.

By and large, boxers are minorities from poor backgrounds. That isn’t to say upper-middle class white people don’t throw their hats into the ring (hello, Chris Algieri), but more affluent families push their kids towards football, basketball, baseball, and even soccer and lacrosse.

The dilapidated boxing gyms and traveling YMCA boxing teams are a staple of urban America, and service minorities, for the most part. The expensive Jiu-Jitsu studios (not to mention kick boxing and wrestling) will serve the more affluent peoples, with a larger portion of their memberships being white males. Statistics could be cited to support the claim that a majority of boxers in the U.S. are minorities, but the simple eye test will suffice.

It goes without saying that the neighborhood hobo with the needle tracks and cat piss stench aren’t rising up to promote HBO and Showtime tripleheaders. For the most part, promoters are Ivy-league-educated white men, many of whom come into the sport with a suitcase full of cash and leave it with a Brinks truck stuffed to the gills.

Those who claim racism doesn’t exist in boxing choose not to see it. They bury their heads in the sand, willfully ignorant to what should be plain as the nose on anyone’s face. Boxing is a sport where each and every fighter with a management and promotional team with a plan to take him to the top benefits from careful matchmaking. There are no top stars who will truly fight all comers, anytime, anywhere. Boxing is a business and such a business model doesn’t make money. The reaction to the matchmaking of certain fighters is treated differently, however.

Take a mental inventory of the fighters labeled “cherry pickers” and “duckers”, and a majority will be black. But someone such as Gennady Golovkin, who continues to call out the big names with the next sacrificial lamb already lined up, is pen in hand and ready to travel HBO’s route of least resistance. Meanwhile HBO tosses out lowball offers at quality opponents and we’re sold an inferior product.

Bernard Hopkins, specifically, is labeled a boring fighter. His style doesn’t produce fireworks, but he’s able to use some of the most basic tools to nullify the offense of men sometimes 15 to 20 years his junior – a feat that should be applauded. Conversely, you can look at Chris Algieri, who spent the majority of his fight with Ruslan Provodnikov in retreat-and-survive mode, holding on for dear life and wildly flinging arm punches, and his performance was considered a masterful defensive performance by most in the media.

Algieri, seemingly hand-picked from the Abercrombie & Fitch storefront to be Manny Pacquiao’s November 22 opponent, has been given the royal treatment by Top Rank. From the time he got up from a couple early knockdowns against Providnikov, Algieri has been buffed and shined and presented at opportunistic angles. During the bloated international press tour to announce Pacquiao-Algieri, he was presented as the American dream. Oh, and the ladies couldn’t keep their hands off of him (see New York press conference).

Pacquiao-Algieri will likely fall flat on its face at the box office, but no expense has been spared in presenting Algieri as a worthy opponent. Compare that to Pacquiao’s two fights with Timothy Bradley, a more worthy established world champion, and the amount of press coverage of Algieri to what was given to Bradley is astonishing.

Unfortunately, blacks aren’t the only ones who have a legitimate gripe about their treatment. Two of the biggest promoters in the sport, Golden Boy and Top Rank, dedicate a large majority of their resources to the promotion of Latinos. At the height of “Pacmania”, we saw the brief explosion of Filipino fighters pushed out on TV. Two of the biggest weekends of the year are Cinco de Mayo weekend and Mexican Independence Day weekend, with Puerto Rican Pride weekend a probable close third.

National Pride is routinely used as the back story to fights between Mexicans and Puerto Ricans, Mexicans and Filipino’s, Mexicans from Tijuana and Mexicans from Mexico City, etc. Minorities kills each other for our entertainment while the well-to-do white men in suits stuff suitcases full of cash behind the scenes.

Let us not forget, it was Bob Arum (CEO of Top Rank Promotions), who told former IBF President Robert Lee, “Let’s let the blacks and Latinos fight in the ring and we’ll count the money on the outside.”

It was also Bob Arum who opined on the difficulty in promoting black fighters and the ease of promoting Latino fighters. Latinos, for the most part, come from countries where boxing is mainstream, and TV broadcasts will garner tens of millions of viewers. There’s easy money in glorifying and exploiting the Latino market, and it requires actual work to muster the black public.

While Bernard Hopkins’ race may play a part in the low profile coverage of his historic accomplishments and the public’s perception of him, it’s not entirely to blame. American fight fans want to see offensive-minded battlers with their front toes on a line, winging punches until one man falls. A boxer with a mastery of the basics of footwork, angles, distance, and feints just isn’t what the collective audience wants to see. Unfortunately for Hopkins, his style may excite boxing purists with an appreciation for the art this sport can be, but it turns off the majority. Hopkins’ willingness to step out of line, flip the script and speak what’s on his mind also plays a huge part.

Hopkins may be slightly out of line when he says his race is the reason for his predicament, but he’s not entirely wrong. And he isn’t the only one who should be speaking up about it.