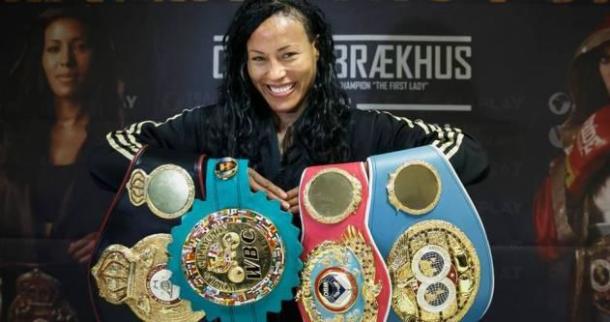 Tonight in Frederiksberg, Denmark, boxings’ “First Lady”, Cecilia Braekhus (27-0, 7 KO’s) retained the WBA, WBO, WBC, and IBF welterweight titles with a unanimous 10 round decision over Jennifer Retzke (15-2-1, 9 KO’s) at the Falconer Centeret.  The bout, billed as “All or Nothing” was part of a 12 fight Nordic Fight Night card by Sauerland Promotion.

The defending champ thoroughly out-boxed Retzke over the first four rounds, but an injury to her right foot at the end of the fourth altered the contest. The injury impeding her usually fluid movement, the champ was forced to take a toe-to-toe approach and abandoned the technical approached we’re so used to seeing.

The change in fight plan didn’t change the course of the fight however; over the remaining six rounds Braekhus stood in front of Retzke and traded shots. Even on one foot, and being outweighed by nearly 10 pounds (fight night weights), Braekhus showed her versatility and came out on top with a lopsided win. Scores of the bout were 100-90 twice and 98-92.

Overall, this was Braekhus’ 16th title defense. She won the WBA and WBC belts in 2009 and in 2010 picked up the WBO strap. The IBF title wouldn’t come until 2014, when a shut out, history making win over Ivana Habazin made her the most successful women’s boxer to date, being the first to unify all four of the major world championships.

This was Retzke’s first loss in four years, but she doesn’t walk away empty handed; the Berlin native still holds the lesser regarded IBO and GBC welterweight titles, as well as the GBC light welterweight belt.

On the under card, interim WBC World light welterweight champ Klara Svensson (15-0, 5 KO’s) defeated former lightweight title holder Lucia Morelli (18-5, 8 KO’s) to retain her title. It was her first defense since winning the belt in September; scores were 100-90, 100-91, and 99-91. This was the second straight loss for Morelli.