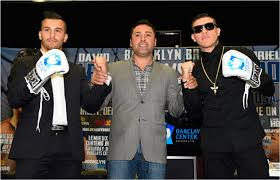 Just a few short years ago the hype on Lemieux was high. He looked like the next big thing at middleweight, despite a glaring lack of quality opponents on his resume. It all came crashing down at the hands of Marco Antonio Rubio, who weathered Lemieux’s early aggression before putting an end to their affair in the seventh round of their April 2011 affair.

Lemieux looked to bounce back with a win over middleweight gatekeeper Joachim Alcine, but suffered a second consecutive defeat, this time by way of a majority decision.

Since the back-to-back losses, Lemieux has built himself back up into a potential contender, but the hand-picked opposition leaves plenty of room for pause. In his last outing, Lemieux needed only 3 rounds to dispatch former junior middleweight prospect and middleweight title challenger, Fernando Guerrero.

Without the backing of a powerful promotional outfit, Rosado has quite comfortably wedged himself into the role of stepping stone for middleweights and junior middleweights alike. Early career losses to Fernando Guerrero and Alfredo Angulo were minor setbacks to the popular Rosado, who spent the next two years wading his way through the lower ranks of the northeastern circuit. 2012 wins over Jesus Soto Karass and Sechew Powell showed that Rosado had potential. But it was a blood-soaked losing effort to middleweight darling Gennady Golovkin that put Rosado on the map. Fighting from behind a flowing river of blood, Rosado was able to pose problems for Golovkin and was only slightly behind before the fight was stopped in the tenth round due to cuts. Rosado has gone on to lose three straight since the loss to Golovkin, but his controversial loss to J’Leon Love was ruled a no-contest after Love failed a post-fight drug test (banned diuretic).

Time and the eventual effects of so many brutal and bloody losses may be catching up to Rosado. His last fight of 2013 saw him put in a great performance against then-WBO middleweight champion Peter Quillin, which earned him another go against junior middleweight prospect Jermell Charlo. Against Charlo, Rosado looked sloppy, flat-footed, and outclassed.

Lemieux is an aggressive power puncher with a come-forward style. Rosado is the taller and longer fighter who has shown a slight knack for being able to keep more plodding brawlers at a distance. But in the end, Rosado will usually opt to slug it out in the trenches. Both men leave big counter punching opportunities when they open up on offense. Lemieux has a tendency to admire his work, while Rosado will back up with his shoulders squared to his opponent and hand low.

The two big questions going into this fight are whether or not Lemieux will have a plan B if and when Rosado is able to withstand his offensive outbursts, and if Rosado’s rice paper-thin skin will hold up. Lemieux looked improved against Fernando Guerrero, albeit a punchy and fading Fernando Guerrero, while Rosado is starting to show some serious mileage.

Lemieux should be able to grind out a tough stoppage win over nine rounds, when his powerful right hand will have finally caused enough damage to a wide cut opened up over Rosado’s left eye earlier in the fight.