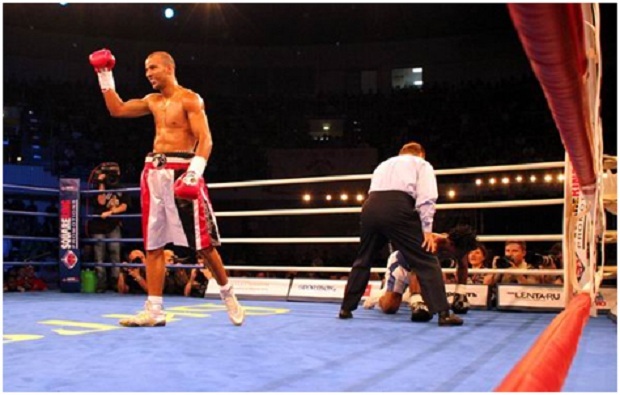 This mugging occurred on May 21, 2011. The location was the Dynamo Palace of Sports in Krylatskoye, Moscow, Russia on the undercard of the Jones-Lebedev shocker

This fast assault took a bit longer than most, but in the second round things heated up. Sillakh (15-0 at the time) found a comfortable separation and began hammering Hmaza (12-2-2) with one-two’s and left hooks to the gizzard to soften up his opponent for the kill.

The strange end came in the third when the rangy Sillakh pinpointed his shots and finally cornered Wandera with a malicious volley causing the Ugandan cruiserweight to literally run across the ring with Ismayl chasing him and a recalcitrant referee Steve Smoger looking on. That was a real ring mugging but Smoger, as is his wont, wrongly let it continue and allowed the Ugandan to take unnecessary punishment. In the end, Wandera took crunching haymakers before the seemingly uninterested Smoger finally deigned to step in. https://www.youtube.com/watch?v=fnXETuramsw

Demonstrating that turning his back on an opponent was not a one-time thing, Wandera did it again in 2012. Protesting a supposed foul by Bukom Banku (aka Braimah Kamoko), he turned his back twice on the WBO African light heavyweight champion from Ghana and refused to continue fighting, forcing referee Roger Barnor to end the bout.

Wandera knocked Bukom Banku) down in the first round for the first time in Bukim’s career but failed to capitalize. Wandera was also deducted one point in round 3 and then turned his back and quit.

And in 2014 in Tmava, Slovakia Wandera was deducted two points for “irregular action” in a losing effort against Tamas Kovacs (25-1) but it could have and probably should have been a DQ. The irregular action included just about every foul in the book. In fact, Wandera, the younger brother of former IBF champion Kassim Ouma, even hit his unsuspecting opponent at the opening tap.

In a case of what goes around comes around, Sillakh was subjected to a particularly sudden and brutal assault from Sergey “The Krusher” Kovalev, mugger extraordinaire, in Quebec City on November 30, 2013. Shortly into round two, a right hand krushed and thumped Sillakh decking him hard.. Wobbly and almost defenseless, Kovalev ended matters with a crunching a right hand, with two lefts catching the Uke on his way down for the second and last time. https://www.youtube.com/watch?v=0pCH9M3Fw88