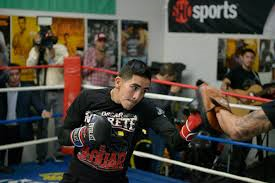 WBC junior featherweight champion Leo “Teremoto” Santa Cruz (28-0-1, 16 KOs) will put his belt on the line against unheralded Jesus Ruiz (33-5-5, 22 KOs) on the undercard of Bimerne Stiverne’s WBC heavyweight title defense against Deontay Wilder, this Saturday at the MGM Grand Garden Arena in Las Vegas, Nevada. Set to air live on Showtime, the fights are to begin at 10 PM ET/7 PM PT.

This fight is more suited for a Friday Night Fights showcase. Leo Santa Cruz has proven himself a force to be reckoned with, but his choice of opposition in his last few fights has been questionable at best. Some speculate that Santa Cruz’s handlers may be keeping him fresh until Al Haymon’s now-confirmed NBC boxing series is up and running and bigger fights with Abner Mares, Carl Frampton, Scott Quigg, or even 122-pound stalwart Guillermo Rigondeaux can be put together. But in the meantime we’re left watching Santa Cruz put his belt up against former sparring partners (Manuel Roman) and battle-weary former titlists (Christian Mijares).

Already well known amongst hardcore boxing fans, Santa Cruz arrived on the big stage in June 2012, when he outclassed a very game and willing Vusi Malinga to win the IBF bantamweight title vacated by Abner Mares. He made three title defenses before moving up to the junior featherweight division, where he needed only a quick welcome fight before stopping WBC titlist Victor Terrazas. Including his wins over Roman and Mijares, Santa Cruz has made three successful defenses of his WBC junior featherweight title.

Santa Cruz is a crowd pleasing fighter. What he lacks in concussive power he makes up for in tenacity and work rate. As a fighter on the rise, he systematically broke down his opponents with a smart blend of body shots mixed in amongst a barrage of shots upstairs. Over the course of his last few fights, Santa Cruz has displayed one of two things: a fighter who has reached his plateau, or a fighter lacking interest in the lower level of opponents placed in front of him.

With potential big fights looming just over the horizon, Santa Cruz can’t afford to get caught looking past Ruiz. Despite his lack of top quality opposition, Ruiz shouldn’t be a complete pushover. He’s only 25 years of age, and his once-in-a-lifetime shot is right here in front of him. While just about anything can happen in the ring, Santa Cruz is unlikely to suffer a letdown on Saturday night. Those guiding his career know what they’re doing, and Jesus Ruiz was chosen for a reason; to go out there and take a beating in a pleasing fashion.