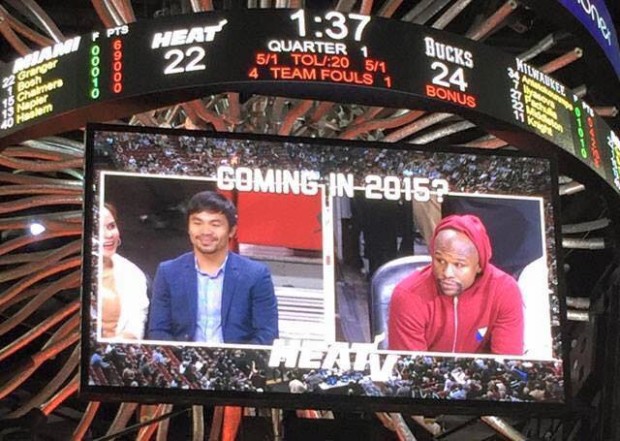 Hola y bienvenido to the fastest running, most ducking and dodging, crispiest fried chicken flavored edition of boxing’s highest rated, most conspiracy tinged weekly pugilistic paper, The Sunday Brunch – We are your weekly dose of astrophysics jokes, boxing nonsense and sometimes we delve into chemical composition flowcharts using the empirical formula. Take out your abacus and put away your football boner, we’re about to get whatever the opposite of “jiggy with it” is. With that being said, I gave you your instructions in the dressing room; what I say you must obey – Cuidate, escucha me, toca los manos y buena suerte…Let’s get it on!

Bet some of you are waiting for that Manny Pacquiao-Floyd Mayweather announcement during ‘the big game’. Others, still will likely be getting crushed in a hot fucking kitchen somewhere to make sure that the most money can be extracted from those mesmerized by the football game going on.

Newly acquired photos of Floyd Mayweather’s TMT party tour bus show that they have arrived in Arizona…Does this mean that he’s going there to announce the fight?! Is this just a ruse? Didn’t Mayweather just Tweet a photo of himself laying in a hammock saying something about drinking pina coladas beach-side in Jamaica?

Is he there to announce the mega-money match-up? Is he just attending the Superbowl as a fan of the sport? Did they announce it already and you’re reading this wondering what the fuck I’m on about? They…they didn’t announce it, did they?

What about Mike Koncz and Bob Arum blocking the fight from taking place for so long? Didn’t they largely keep Manny Pacquiao in the dark regarding his finances for most of his career? What about Pacquiao’s financial adviser, Michael Koncz leaving him responsible for over 18 or 50 million dollars in tax debt (depending on what you believe)?

How about Vision Quest moving in to handle the Filipino’s accounts and being promptly fired by Top Rank when they sought fight contracts and revenue records from Top Rank themselves?

What about Miguel Cotto and Floyd Mayweather? Doesn’t a second fight with the Puerto Rican icon make a lot of sense, too? Or Jesse Vargas VS Manny Pacquiao…What about Amir Khan and his deadline!

HBO and Showtime are still having issues, aren’t they? I mean, if HBO wants rebroadcast rights, won’t that mean that Floyd Mayweather and Showtime won’t get a cut of that money? No money for Money May? What gives?

OK, Floyd and Manny had that run-in in Miami at that basketball game, exchanged phone numbers and reportedly had a rendezvous in Pacquiao’s hotel suite. Good news for fight fans, right?

It’s definitely good news. Want to know what’s going to happen? Would you like to know exactly how this saga goes down?

The two finally meet at the MGM Grand on May 2nd, which is announced one week after the Super Bowl Sunday (Brunch). They battle to a majority decision in Manny Pacquiao’s favor, even though 85% of media polled thereafter picked Mayweather as the winner. Floyd Mayweather was the betting favorite…An enterprising individual close to the fighters will have plaeed a large – or enormous – sum of money on Pacquiao to win in such a mannor. Floyd and Manny have their immediate rematch in which Mayweather easily wins, but gets a split decision victory. Both retire after that fight and move to Jamaica where they become best of friends.

Thanks for joining us this time, we’ll be back next week where we will be battling through our third week of flu-riddled illnesses. We will have cooking tips, football updates and the latest and greatest in hip hop showcases. We’ll have randomly assembled words, run-on sentences and dangling participles. Send all bikini pictures of your wives and girlfriends to JESSEBOXINGTRIBUNE@GMAIL.COM or Tweet me inspirational quotes inceccently @JESSEBOXING. Until next time, ciao!