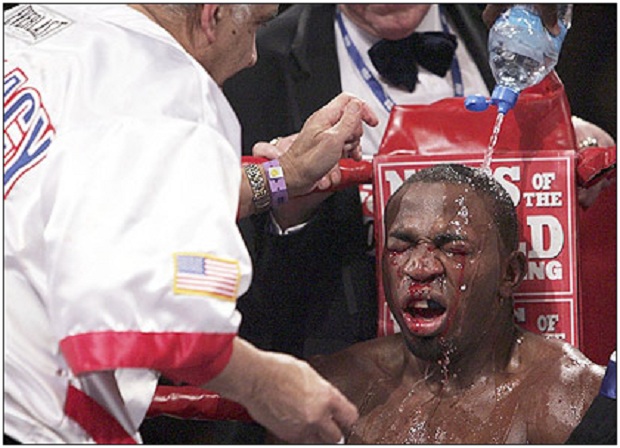 “He [Lacy] would just crunch them…He made our heavy bag look like a peanut.” — Trainer Mike Birmingham

That boxing stories rarely end well is an old refrain, but it is one that resonated on January 30, 2015 in Mashantucket, Connecticut when Jeff “Left Hook” Lacy (27-6) was battered and stopped on the undercard in 4 rounds by Sullivan Barrera.

It doesn’t seem that long ago when Lacy was being hyped as the next BIG thing in boxing, but that was then and this is now and now he seems in dangerous denial.

While his wins against Syd Vanderpool, Rubin Williams, and Omar Sheika were impressive, Lacy’s beat down of Robin Reid (38-4) was astonishing. Reid, who had given Joe Calzaghe and Sven Ottke all they could handle, was a very live underdog. However, “Left Hook” knocked down “The Reaper Man” (as Reid was called) for the first time in his career in the fifth round. He did it again later in the round. Robin was dropped again in rounds six and seven. The Reaper lost a point for a headbutt in round five and another point in the seventh round for holding. The referee finally stopped what had now become a slaughter on advice of Reid’s corner after round seven. See: https://www.youtube.com/watch?v=uZmohDNUYJQ

Lacy, who sported an eye-popping 209-12 amateur record, had seemingly reached the pinnacle of his pro career, After the Reid win, Jeff went to 20-0 as he dispatched Scott Pemberton in two rounds setting up the super-hyped fight with Joe Calzaghe (40-0) in Manchester, UK with the IBF and WBO super middleweight titles at risk.

“It was the only time in my career I was the underdog and everyone had written me off. If anything it motivated me even more to prove I was the best.”—Joe Calzaghe

…I think in the end age and too many years fighting inferior competition will get to him. So will a Jeff Lacy left hook, one that will drop him and hurt him badly enough that he can’t continue. Jeff Lacy by TKO in 10.—Ron Borges

Lacy has been well marketed so he’s gained attention and approval perhaps beyond what is deserved. But I like his power, love his athleticism and his hunger. Calzaghe is hungry knows the clock is ticking on him and is a crafty lefty. This is a 50-50 proposition. I’m going out on a limb here. I see a draw…..Just kidding. Looking for Lacy to bull the Welshman, who has to prove all his smack talk over the years wasn’t just posturing, but he’ll be hurt by the fact that his opposition has been less than stellar since he turned pro in 1993. Lacy TKO 4.—Michael Woods

This is the toughest fight in the career of either man, but I like Lacy because of his strength and power. I like Lacy by decision.–Tim Smith

…Lacy in 11 by KO—Sammy Rozenberg

…Lacy will break him down within ten-Rick Reeno

The fight in 2006 has been fully vetted and needs minimal analysis here. Suffice it to say that Joe put on a clinic on and dismantled and bloodied “Left Hook.” Quite simply, Joe fought a masterpiece and took away Lacy’s will. The one-sided scores read 119-105, 119-107 and 119-107. As Calzaghe later said during his induction into the IBHOF, I’m always grateful to Jeff Lacy for giving me the chance to prove I belonged in the Hall of Fame.”

Lacy took off a year after which he ran off three straight wins against solid opposition including a rematch with Vitali Tsypko (19-1) on December 2, 2006. The first fight in 2004 ended in a NC due to a head-butt and resultant cut. Lacy won this one but just barely- by scores of 96-94, 96-94, 95-95. After the bout, it was revealed that Lacy had torn his rotator cuff and was injured throughout most of the fight. Lacy had surgery on the injury and did not fight for a year.

After a MD win over limited Otis Griffin in 2009, Jeff suffered a humiliating TKO loss to Roy Jones, Jr, via a RTD after 10 rounds. Roy chatted up and joked with the crowd as he had his way with the former Olympian. It was almost surreal to watch this unfold, but then boxing is something that often offers surreal experiences.

Jeff then lost a UD to feather-fisted Dhafir “No Fear” Smith (then 23-19-7) in December 2010 and the scorecards again were dominant.

After almost three years following the shocking defeat to Smith, Lacy returned on November 30, 2013 to win a 3rd round TKO over Martin Verdin (20-16-2) in Baton Rouge, Louisiana. It was his first stoppage win since the Pemberton KO back in 2005. Then, after being brutalized by menacing Cuban Umberto Savage (12-1) in two rounds in 2014 (a fight in which he showed no head movement, jab, or chin), Lacey got a UD win over Timothy Hall Jr (9-19) over eight rounds. It was Hall’s sixth fight in 2014. On January 30, 2015, Jeff was again manhandled by still another Cuban—Sullivan Barrera (15-0). The fight was mercifully stopped by closely watching referee Mike Ortega.

Here is the Barrera fight: https://www.youtube.com/watch?v=FRRRKiVRK_k

The 37 year-old Jeff Lacy is now very much on the wrong side of the career curve. His fall has been swift and deep; sadly, he has become a sacrificial lamb for prospects. If Jeff continues to fight, it will not end well. Someone needs to step in and counsel him because he is making too many excuses and that’s dangerous. As Teddy Atlas said, “I don’t think he should fight anymore. He is a shot fighter.

Hopefully, there will be no more YouTube’s to show.