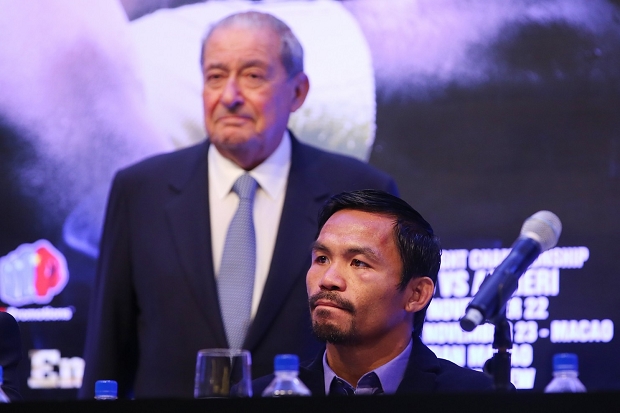 For the first time since I’ve been covering the sport, the media– kinda, sorta– has worked as it’s supposed to work. Not entirely, though, but just enough to corral some of the bullshit and isolate it into just one particular, albeit still way too large, section of the internet.

I’m referring to the recent goings on in the Mayweather-Pacquiao drama and how just a little legitimate reporting has gone a long way in putting things into perspective.

Buried deep inside Kevin Iole’s February 5 article, titled “Despite Arum’s comments, no TV deal reached for Mayweather-Pacquiao bout,” readers could find this essential piece of the “what the fuck” puzzle regarding the hold up in making the mega-fight:

One person who requested anonymity told Yahoo Sports, “Believe me, if this fight doesn’t get done, it will be because of Bob Arum. Nobody can figure what he is doing or why he is doing it.”

…But Arum’s insistence on public comments are clearly an impediment to reaching a deal. That is one point that people on both sides of the aisles in these talks agree about. Top Rank president Todd duBoef is irate at Arum, his step-father, but has essentially thrown his hands up in the air and said he can’t control Arum.

Even Pacquiao’s team has gotten upset at Arum’s willingness to go on the record with comments that often don’t add up.

This is the first time, to my knowledge, that any bit of actual reporting has been used against the headache-inducing, farcical statements of Bob Arum ever since the entire Mayweather-Pacquiao debacle began. Of course, The Boxing Tribune has been there to poke holes at the insanity of negotiations with empty chairs, deadlines to sign non-existent contracts, and fantasy stadiums to house never-pursued mega-fights, but we were frighteningly alone in our insistence on common sense. Neither the mainstream boxing media, nor the fringe blogger intelligentsia would dare touch the issue. Now, at the very least, we have a few lines from Iole and a Deadspin article.

And, of course, there was Ben Thompson of Fighthype, who has also been right on the money all along on Arum’s possible role in holding things up and uniquely able to provide the Mayweather tit for Arum’s tat in this long-running back-and-forth.

Thompson gets accused of playing favorites with Mayweather, chiefly because Fighthype is the only site to which Mayweather chooses to talk with any sort of candor. But what about those sites and reporters– and there are many– who give Arum absolute freedom and access to the public without the fear of any sort of critical follow-up?

It’s the media dupes who have allowed Arum to block, stall, misdirect, and otherwise cock-block the biggest fight in boxing history. The why’s aren’t there as to the reason behind the intentional ramrodding of Mayweather-Pacquiao, but there can be no doubt now that it has been Arum playing master manipulator from day one. It took some of the media guys until just right now to realize they’ve been caught up in a hustle of epic proportions, but let’s give them credit for eventually realizing that something was fishy.

If you ever doubt the true power of the media, just look at what has happened since earlier this week when Iole’s references and the Deadspin story came out. More and more of the reasonable folks have spoken up, applying common sense and reason to five year’s worth of hostilities; The die-hard crazed fanatics have been pushed to the side; and even the agenda-driven media voices, who have previously enjoyed carte blanche in printing unsubstantiated rumors and Arum-contrived propaganda, have been forced to cool their heels. Bob Arum, himself, has been absolutely silent since it was made public that even his own family had tired of his sleight of hand.

As a result, this little window of time between the last media manipulation and the next is giving us our best chance at actually making this fight.

But before patting ourselves too hard on the back, maybe nothing changes if not for Floyd Mayweather, himself, deciding to address the bullshit, directly.

For five years, Mayweather has been silent, allowing Arum and his compliant media dupes to run a train on his reputation and completely dictate the narrative of the situation. If Arum said there was a contract on the table and a deadline to sign, Mayweather’s silence left the truth up to the interpretation of the media and the fans with only one side of the argument available. Maybe he thought it helped his “bad boy” image to be so reviled. But there’s a huge difference between playing the “he’s so smug, he needs to be shut up” villain and being seen as a non-compliant, lazy, disingenuous professional– especially at the end of his career.

And just let me make this clear to both sides of this great debate– My blaming of Arum does not, in any way, shape, or form absolve Mayweather of any responsibility he may have in blocking the mega-fight.

The truth is that nobody outside of a mere a handful of individuals knows to what extent, if any, Mayweather has mucked up negotiations or efforts at starting negotiations. Unlike Arum, who has left a clear trail of deceit and intentional misdirection, Mayweather’s level of culpability is hidden. If you’re one of those reporters who claims insider knowledge proving Mayweather to be fully in the wrong, you’re either delusional or a flat-out liar. There are probably only ten people in this world with the type of insider access to make that assessment– and I guarantee you that none of them are rushing to spill their guts to some two-bit blogger.

So, like most reasonable people would do, I withhold judgment on Mayweather until something clear and concrete emerges, proving blame. How the hell does any reasonable person– much less a writer– make a judgment call without knowing the actual truth? All they have, really, is Arum’s claims against Mayweather…but, of course, Arum has been outed as not exactly the most reliable sources of Mayweather info.

To wrap things up in a personal manner– I’m fine with taking heat from “colleagues” when I mention them by name in an article. I would expect nothing less than for them to make some half-assed effort to defend themselves.

And I say “half-assed” because, if I’ve taken the time to mention you by name as an especially egregious piece of work, I make damn sure that you are well-deserving of the “honor.”

Anyway, Examiner.com “scribe,” Brad Cooney– a guy who once told me that he only writes positive articles about Manny Pacquiao because he “happen(s) to like the guy“– left a Facebook comment on my January 25 rant: “The Great Pacquiao Swindle,” calling me a “Monday Morning Quarterback” and questioning why I don’t pick up the phone and contact guys like Arum myself.

Well, first, A Monday Morning Quarterback is someone who makes judgment calls after the fact. I’ve been calling bullshit on this whole hustle from day one. While dummies like Cooney got lead around by their nostrils and laughed at behind their backs for being as smart as a rock, I was posting piece after piece about the hustle as it unfolded– and word for word has come true. Acknowledge it or not, I read the situation and laid it out before my readers in an effort to inform them. I’ve called Arum’s each and every next move over the course of nearly five years– and I’ve been right. Long-time readers will attest to that.

As for calling to engage in direct conversations– does anyone honestly believe that I’d be given full access to do a proper interview? Do you, really? Don’t you think we’ve tried? Why bother with me when Arum can spin the rolodex and find some dim-witted dupe or sit back and wait for some stooge to kiss his ring for the honor of an interview?

And, finally, if we’re going to use football terminology and I’m the Monday Morning Quarterback, what does that make a guy like Cooney– a cheerleader?

But getting back to Mayweather-Pacquiao…The cancer has been isolated and at least partially removed. Now we root around and deal with any of the other complications. And if another cancerous tumor is in there, whether it be Mayweather, Showtime, or HBO, we’ll deal with that one as well– at least until the patient dies on the operating table and all hope is lost…

You can email Paul at paulmagno@theboxingtribune.com or summon him in times of danger by blowing into your secret rocket whistle. You can also buy his book, Notes from the Boxing Underground! Paul is a full member of the Burger King Kids’ Club, a born iconoclast, and an ordained minister in the Universal Life Church.