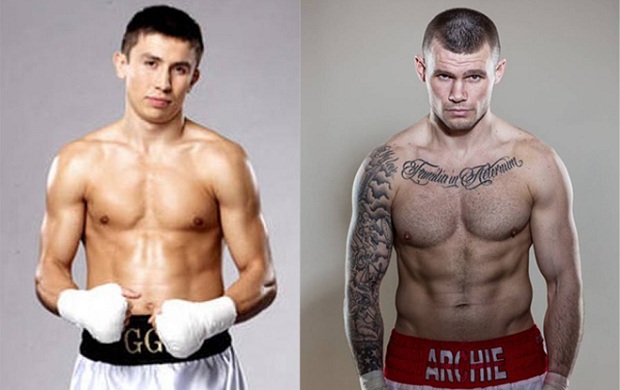 Gennady Golovkin is a compelling force to be reckoned with. He’s Russian, with a raucous Mexican fan base, has a cool three letter alias, sports an extravagantly embellished robe, and has administered beatings and knockouts to 31 opponents with detached brutality.

Martin Murray is in line to be number 32 on Saturday, in Monaco. Three middleweight titles await the winner, and much speculation surrounds the bout. Who wins and how? Will Murray end the GGG Phenomenon?

Golovkin’s intimidating demeanor is a huge factor in his game, and that sets the tone for his fights.

“I think at this point in his career, he has an aura about him that certainly precedes him in the ring,” Scully said. “He fights with what appears to be a single minded focus that is awfully hard to deter. Future opponents see all that be brings to the table, with the focus and the conditioning and body shots and the excellent punch placement, and they know what they are looking at. He’s more than a handful, and barring any unforeseen circumstances, boxing people know it’s going to take an extremely well executed game plan to beat this guy.”

Comparing Golovkin and Murray on paper, with 28 and 12 knockouts respectively, the bout appears to be a mismatch, but Scully is reluctant to dismiss Murray quite so quickly. “I think GGG is obviously a sharper and much heavier handed puncher,” he explained, “but at the same time I don’t think Murray is as soft of a puncher as his low knockout ratio may lead one to believe.”

Scully also noted Murray’s success against Sergio Martinez, whose reckless, hands down style, makes him vulnerable to a sharp offense and saw him on the canvas against Murray.

“He’s proven in several fights, especially with Maravilla Martinez, that he carries some pop if he lands right,” Scully said. “ I don’t think he matches the overall intensity or the sharp punching of GGG but I do believe he’s a gritty guy who also has some solid boxing skills.”

Will Murray have the benefit of defensive holes or careless offense from Golovkin that might enable him to create an upset or seriously threaten his game plan? It seems to Scully only an all out war would have to be waged to know for sure. “I think Golovkin’s offense is obviously stellar, and I am pretty sure that his conditioning and work ethic are among the best in the game,” Scully said, and continued, “His defense seems pretty solid thus far, although we haven’t really seen anyone with a superior arsenal going at him with both guns blazing.”

To emerge the victor against Golovkin, Scully believes these are the good basic methods he must put to work. “I would think he needs to utilize his legs and jab more than ever, that’s point number one,” Scully advised, then further explained what Murray has going for him that would be productive. “I think he bobs and weaves out of trouble at times very well,” he continued, “and I’ve also seen him use angles on opponents that worked well for him and would obviously give him a better chance at being effective.”

As for Murray being able to drop Golovkin in the same fashion he did Sergio? “He definitely could,” Scully decided. “Anything is possible in this game, but I think Golovkin’s chin and hands up defense will be up to par for this fight. I don’t see him going down but if he does, he will get up.”

Golovkin being floored by Murray and getting up afterward would provide an epic end to this bout. Golovkin, under seige, retaliates in his violent, matter of fact way, puts Murray on his ass, and ends another day at the office. Scully offered a more fact based scenario for the outcome of this fight.

“ I think GGG is in the middle of his prime as we speak,” he said. “He’s on a roll, and he’s got big things ahead in the near future. So going into this fight Golovkin is well aware that as long as he is successful and with that type of exposure and financial windfall so close for him I don’t think we are going to see anything from him in this fight that is any different than what we’ve been seeing from him over these last couple of years.”

Scully continued, “I believe Martin will give a strong effort and he may very well be more successful than other recent challengers but at the end of it all, I can’t see Gennady losing right now.”

When fight night arrives Scully envisions Murray having some modest progress to start the night.

“Early on I could see Martin trying to box and use angles and stay one step ahead of GGG and having some success with that strategy,” Scully said. But- that could prove to be fleeting once Golovkin is able to maneuver and trap Murray on the ropes.

This is where Murray will make a fight ending move Scully has observed in previous fights.

“I notice one habit Martin has,” Scully said, “Where he sometimes gets caught up on the ropes and bends forward at the waist on the inside. I feel that would be a catastrophic mistake against Golvkin.”

Catastrophic for sure- Golovkin will have Murray precisely where he wants him and will have zero mercy. “I see GGG ripping a lot of uppercuts when that happens,” Scully said, “and then finishing up with those brutal hooks to the body that he throws.”

Getting to that point, Golovkin may have to put in a little more work against Murray, but nothing Scully believes to last twelve rounds. The end will be within the distance, in Scully’s opinion. “I figure on a mid to late stoppage along the ropes.”

In this analysis Gennady Golovkin wins again, then time will come again to choose another foe. Scully’s choice?

“Personally I’d love to see him in with Miguel Cotto at Madison Square Garden in June,” Scully said, echoing the sentiment of many fight fans. “I think with the Puerto Rican Day parade going on the following day and because of the fight and the logistics all in play it would be a tremendous event for the middleweight division,” Scully elaborated.

Failing that mega fight option, Scully acknowledged a few more guys who should take the GGG challenge. “Guys like Andy Lee, Peter Quillin and David Lemieux,” he said, “would be must see fights for boxing fans, especially if one with Lemieux was held in Montreal. But right now at 160 I think a Cotto fight in New York City in June is the one for Gennady.”