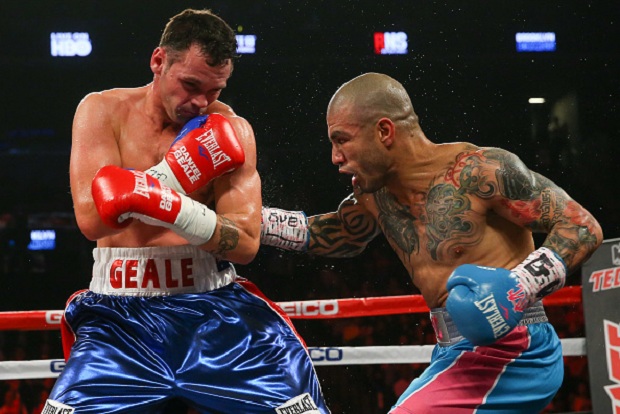 The real secret to boxing’s rebirth as a semi-mainstream, semi-universally respected sport is not really such a secret. Think of it more like an inconvenient truth that most everyone with half a brain in the business prefers to gloss over in favor of sleight of hand and get rich quick schemes.

The Premier Boxing Champions card on NBC touched on this key factor Saturday afternoon in front of seventeen fans (give or take three or four) at the StubHub Center in Carson, California.

In the marquee match-up of the afternoon a somewhat faded, somewhat disinterested Robert Guerrero was matched up against a very motivated and hungry journeyman in Aron Martinez. Guerrero’s edge in skill and ability was negated by Martinez’s drive to keep pushing forward. The end result was ten very entertaining rounds and a near Upset of the Year as Guerrero survived an ugly knockdown in the fourth to eventually win a split decision.

What looked like the poorest PBC main event to date turned out to be one of its best. Calls for a rematch were immediate.

And Guerrero-Martinez showed us the key to it all– Compelling fights created through proper matchmaking.

Obviously, this was not the intention when Al Haymon’s matchmakers put this fight together. The idea was surely to get Guerrero a highlight reel performance against a fighter game enough to make a fight of it, but not good enough to be an actual threat.

A diminished Guerrero and an ultra-motivated Martinez ended up hitting the ring as equals. Guerrero’s early round malaise inspired Martinez to amp up the effort, which, in turn, motivated Guerrero to get his act together for a late rounds push.

Since the very beginning of the sport, the talent of knowing the alchemy of matchmaking has been a sought after skill. Mostly, however, it’s not used to create quality match-ups, but to create bouts that look good on paper, but are really guaranteed wins for the house fighter. Bob Arum and his team are the very best at making competitive bouts that aren’t very competitive at all.

But the same matchmaking skill that’s applied to padding a resume can also be applied to making quality scraps that are truly compelling contests.

Proper matchmaking takes an understanding of the sport, the fighters, and the fighters’ psychologies. It’s not as simple as merely plugging two big names into a main event slot. When done right, though, the result is instant magic.

In this day and age, with the boxing landscape resembling the final fight scene from Gangs of New York, it’s becoming increasingly difficult to put quality high-end matches together.

The Miguel Cotto-Daniel Geale bout Saturday night at the Barclays Center in Brooklyn was a prime example of a poor styles match-up slapped together as a mix-and-match main event.

Ten seconds into the bout, it was clear that a mismatch was likely in the works. Talks of size disparity flew out the window immediately when we saw a lumbering, uncoordinated Geale get tagged with the first Cotto combination of the evening. We should’ve seen this coming. Many did. Catchweight or no catchweight, Daniel Geale would never have been able to beat Miguel Cotto.

Daniel Jacobs would’ve been an interesting match-up for Cotto, especially given his NY roots and the people he could bring to the pro-Cotto house. But Jacobs is with Haymon and PBC. Both David Lemieux and Hassan N’Dam N’Jikam would be good styles match-ups for Cotto, but the two are scheduled to face each other for the vacant IBF middleweight title. Or how about Curtis Stevens? Andy Lee? How about a move back to 154 and clashes with Erislandy Lara or Demetrius Andrade? And, of course, there’s Saul Alvarez and Gennady Golovkin back at middleweight. All would be good fights that could deliver a memorable evening to fight fans, perhaps even produce a “classic.”

But Cotto-Geale was the best fight that could’ve been made on Saturday, given finances, politics, Cotto’s desire to defend the middleweight title, and his decision to not entertain offers for bouts with Alvarez and Golovkin. In theory, there were many better fights for Cotto, but Geale was the best option after so many filters had been applied to the matchmaking process.

So, fans were treated to a complete and utterly anticlimactic mismatch, as well as a total waste of a valuable HBO date.

What tends to confuse people is that, in the short term, the squash on Saturday night was a greater success than the competitive bout on Saturday afternoon. There was a big live gate for Cotto-Geale and the TV ratings will probably be quite solid. Guerrero-Martinez, on the other hand, played to an empty arena and will probably do relatively poor TV numbers.

But Cotto-Geale did nothing for the sport. It won’t bring in a single new fan or do anything to reenforce the hardcore fan’s loyalty. The only ones who benefited from Cotto-Geale were those with a direct money interest.

Guerrero-Martinez could have, conceivably, made new fans for the sport or, at the very least, give the already-dedicated fans a “Whoa” moment or two as a reward for their decision to watch.

The problem with doing the right thing when it comes to matchmaking is that the boxing power brokers need to be willing to forgo the quick cash-out in favor of the long-term investment. It’s a concept totally foreign to boxing and one that will bump heads with the sport’s political landscape.

But there’s no other road to success for boxing. At some point, this all has to be about making the best bouts that produce the best results. And when everyone is isolated in their own little camps and cliques, the blockbusters may still force their way into being, but the best, most entertaining bouts are almost guaranteed not to happen.

You can email Paul at paulmagno@theboxingtribune.com…or not. Buy his book, though: Notes from the Boxing Underground! Paul is a full member of the Burger King Kids’ Club, a born iconoclast, and an ordained minister in the Universal Life Church.