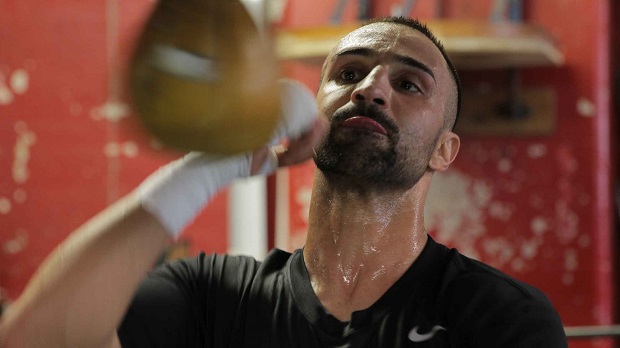 Hola familia y amigos, welcome to a dirty water hot dog and foldable, oil-down-to-your-elbow, real deal Holyfield New York pizza slice flavored edition of Central Florida and Central America’s highest rated, most money-spinning proper pugilistic paper, The Sunday Brunch – Collectively, we have less testosterone and smaller dicks than UFC champion, Ronda Rousey . This week we’re talking a bit about Paulie, a bit about Danny and if there’s time, we’ll have some Dan Rafael jokes for good measure. With that being said, I gave you your instructions in the dressing room, what I say you must obey…Cuidate, eschua mi y toca los manos…Let’s get it on!

Years ago before Paulie Malignaggi became most fight fans’ favorite boxing color commentator, it was clear and obvious that he had a talent for talking; what he said was interesting and it made people want to listen. Fast forward some years and Malignaggi is indeed doing what some said he would be as an award winning commentator for Showtime, Fox Sports and Sky Sports Boxing.

In April of 2012, an aspiring boxing writer scribbled this down on a beer napkin and submitted it to this very website… “Outside of obtaining a case of pugilistic dementia, there’s little left for Malignaggi to achieve inside of the squared circle. He has made some handsome paychecks from his notable losses, but as they say, you must think outside of the box to get inside the box. Using his unique gift for remaining captivating throughout his often long-winded diatribes, dollars-to-pesos, Paulie would easily give a certain other Magic Man a run for his money (and his cue card reading ability).” “The boxer turned commentator role is one that is not new to the sport (See: Roy Jones Jr., “Big” George Forman, Antonio “The Line” Tarver etc…) and from a fan’s prospective it is always beneficial to have some genuine veteran insight during a boxing match. This would be an extremely intelligent avenue for Malignaggi to explore and to remove himself from the harsh world of prize fighting at the age of 31 can only be advantageous to the people that do care about him.”

Glad to see things are going well for the Magic Man now. Aside from the loss he sustained on Saturday night; the sportsmanship the two athletes displayed was humbling. The fight did go as most predicted, though. Malignaggi would box, Danny Garcia would load up on shots. The two would play the game for some time until the accumulation of damage from the iron-fisted Garcia would be too much for veteran referee, Arthur Mercante Jr. to let continue.

For most of the match, the Brooklynite made Danny Garcia look ploddingly slow, however, Garcia is nothing if not an extremely heavy-handed, tank of a junior welterweight; one that was way too large and powerful for Malignaggi.

It says something about pride and heart when a guy with an 18% stoppage rate steps in the ring with an undefeated young champion where 57% of his wins came by way of knockout. Danny Garcia would have some interesting encounters with fighters like Manny Pacquiao, Marcos Maidana and Shawn Porter. However, rematches with Lamont Peterson and Mauricio Herrera should be a priority for the Philadelphian, as most outside observers witnessed blatant robberies in his favor.

Do people seriously think that Ronda Rousey can even be competitive in a boxing match with Floyd Mayweather?

Seriously. Did you see her “Spar” with Vic Darchinyan? Come on now.

Think I’m an asshole? Want to win a gift card to Quincy’s, home of the Big Fat Yeast Roll? Submit your comments below for a chance at victory.

Thanks for joining us again this week, team. We’ll be back next time with more scathing fake news reports and pictures of Carl Froch’s wife’s tits. We will have recipes for fresh tagliatelle in a mushroom cream sauce and a quick instructional video on how to properly use a knife. Not the pussy knife you have in your drawer, a real razor sharp knife that can cut your little fingies off with just a passing glance. Looks like we’re going to need a bigger boat, Get your ass to Mars and Tell em’ Large Marge sent ya! Until next time, sante.