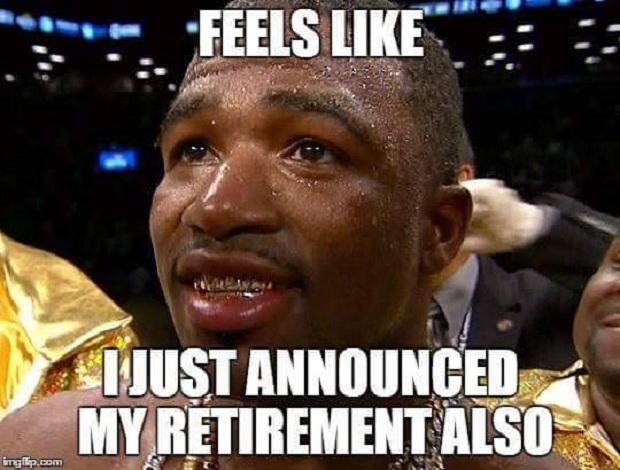 Hola familia y enemigos, welcome to a record – tying edition of Panamá City’s highest rated, most money-spinning proper pugilistic paper, The Sunday Brunch – We are all over the Manny Pacquiao fake saltwater injury story along with the Floyd Mayweather fake PED story…This week, instead of talking about Floyd Mayweather and his textbook shutout over Andre Berto Saturday night, we’re bringing you some of the most quotable quotes of the weekend. So, hold on to your 1990’s colored hoodies and bust out your Snoopy Sno-Cone machine, we’re about to sort through this nonsense… with that being said I gave you your instructions in the dressing room, what I say you must obey; Cuidate, escucha mi, toca las manos y buena suerte…Let’s get it on!

“Amir Khan’s suit/jacket, though. He looks like a piece of luggage.” – Unknown

“He may not be everything people want him to be, but I’m pretty sure he’s everything HE wants to be…” – Unknown

“Regarding Floyd Mayweather and his taking of an IV prior to the Manny Pacquiao fight, as far as you’re concerned, has Floyd Mayweather done anything wrong, and are you looking into that possibility?” – Jim Grey

“Are you the final authority on this?” -JG

“Yes. I am speaking on behalf of the Chairman and the Commissioners.” – Bob Bennett, Executive Director, NSAC

“What people didn’t know was my contract with HBO was up years ago. I was fighting on a fight-to-fight basis with HBO. Then eventually I got incarcerated, then when I came home I spoke with HBO and I said here’s the deal that I need. They didn’t think the numbers were real, so I went to CBS and Showtime and I told them ‘I need this’. Everything I asked for in boxing – everyone – they treated me fair…You get to a certain level that you can’t buy anything anymore.” -Floyd Mayweather

” I’m not perfect, but I strive to be a perfectionist. Even when I’m in the corner and my dad is giving me instructions and I know that it is something that isn’t working, I’m not going to talk back…Never outshine the master, show respect and you will get respect.” -Floyd Mayweather

“I can look at a fighter and tell you what he can do good and what he can’t do good… as soon as a fighter comes out I can touch and with one jab. Just one jab and he is beat. That’s all it takes, one jab and I said he was beat. Like with Pacquiao [he came out in the] first round and I felt him out like this [waves left arm], I counter him with the right hand, it kind of buzzed him a little, it stunned him a little bit. I had to let him know ‘you aren’t just going run up in here; it’s hot.’ ” -Floyd Mayweather

“So, if I’m not mistaken, [with] the media and the critics, the three top fighters are Pac, Canelo and Cotto, right? Well you know it is like bowling, I got a turkey on all three.” -Floyd Mayweather

Thanks for joining us again this Sunday, we’ll have a more traditional “hit-style” Brunch next weekend. We will have dangling participles, run-on sentences and what will likely be the worst selfie you have ever seen. Follow us on Periscope and Twitter @JESSEBOXING or email us at Jesseboxingtribune@gmail.com … Until next time, sante.